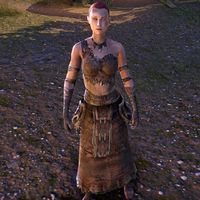 Wyress Demara is a Breton wyress who can be found within the Viridian Woods.

Wyress Demara can first be encountered near the entrance to the woods, when she is approached she can heard to say "The woods are no place for a princess." She can then be spoken to.

"The woods welcome you. Know that the creatures here are neither enemies nor friends. There are hunters … and prey."
Are these woods not safe to travel through?
"For you? Perhaps. Viridian Sentinel once kept the wild at bay for the folk of Bangkorai, but his power wanes.
Soon he may regret saving the princess of Evermore. Her mother already mourns her death, so why interrupt the natural course?"
Evermore's princess is here?
"Gravely wounded, but yes, Princess Elara is here. The Sentinel tends to her, and it takes all his power to draw her away from death.
He would welcome aid, if you wish to give it. We Wyrd have fulfilled our part of the bargain, and shall offer no more."
I'll go find him then.

You can ask her a few more questions after the quest begins.

"He'll be at the standing stones by Viridian Lake. His power is strongest there.
Look for the broken statue. It overlooks the altar where he works."
Who is the Viridian Sentinel?

"The Sentinel is part of an ancient pact, made long before living memory. A guardian of the woods, of sorts, who anoints his or her successor without needing our approval.
Not all Wyrd believe we should continue to honor the pact."
Why wouldn't you honor it?

"The Glenmoril Wyrd were not a party to the original pact. It's only our connection to the forest which binds us to it.
The Sentinel is no true ally to the wyresses of the Viridian Wood. His sway over the natural order is anything but natural."

What sort of pact?

"The forest is old and powerful. Long ago, a man not of the forest found a way to harness the forest's power and bend it to the will of his people.
They called him the Viridian Sentinel. The title, and its power, has been passed down for generations."

"If I had a seed for every man, woman, and child who asked me that, I'd cover the land in ivy in a fortnight.
We are of the forest, and the forest is of us. That is all an outsider needs to know." 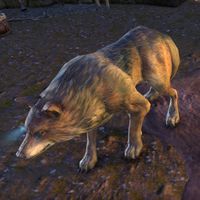 Wyress Demara as a wolf

After helping the Sentinel heal Princess Elara, Wyress Demara will appear at his hut and the following conversation will occur:

Once you obtain a Spriggan Bud from the Voice of the Forest, you will have to present the blossom to Demara, who can be found at one of the Wyrd camps in the woods.

"A familiar scent surrounds you. Did the Sentinel send you? What do you hold?"
The Sentinel said you'd know what this bud means.
"How dare the Sentinel pick his successor out of pity! But she didn't bring us the bud, you did. Why should we give our blessing to one who needs another to carry her burdens?"
What do you mean, his successor?
"He didn't even trust you enough to tell you, did he? Let the Sentinel explain to you when you next see him. I'll do my part and no more.
Where is this princess who is greater than the needs of nature?"
If you to speak to Elara, she's waiting at the Sentinel's hut.
"Too weak to even follow you? No, the forest does not need such a creature!
The Sentinel oversteps his bounds, and the Wyrd will not allow it!"

Princess Elara will arrive and argue with Wyress Demara.

Princess Elara: "If you have something to say, you'll say it to my face!"
Wyress Demara: "I will. You are weak. Fit for little more than prey. How do you hope to wield the Sentinel's power?"
Princess Elara: "Stenwick is trying to save my life! I don't know what he has planned, but I certainly owe it to him to see this through!"
Wyress Demara: "The child knows nothing. And he expects us to offer our blessing?"

You can speak with Demara after this:

"Once, the Viridian Sentinel stood for something more than a wetnurse to spoiled children. Now, he expects us to train and rear this daughter of the city as our own?
No. The Sentinel asks too much."
Why do you dislike the Sentinel so much?
"His time wanes. He will make this girl the new Sentinel, untrained and unfit! He holds no respect for the forest, and no respect for the Wyrd.
What does it matter to us if one child withers to allow the forest to grow free, I ask you?"
The Sentinel said you'd know what to do.

"Hm. We've heard nothing from the Sentinel these past days but demands. Still, we will do what must be done.
Perhaps we can trust you to make the correct decision when the time comes."
Does that have something to do with this bud?
"Althene will help you prepare it. For the Sentinel's ritual, he needs a spriggan bud, freely given. You have obtained that, but the bud will not bloom without nurturing.
I hope you aren't squeamish about blood."

I need to speak with Princess Elara too.

"If you must. Of course, you already know whose side she'll be on.
That said, arrangements must be made. Be quick."

After this encounter, the following exchange occurs.

Wyress Althene: "But sister! You said this was the last time we would help the Sentinel!"
Wyress Demara: "Enough. Come, let us finish the blessing and be done with it."
Wyress Althene: "Come along, then. We have a sacrifice ready."
<Wyress Althene walks to the altar.>
Wyress Althene: "When I say, hold the bud out in your hands. Keep them steady, no matter what happens."

Once the ritual is completed, Wyress Demara will make a cryptic remark.

"Go, do as the girl bids. We will wait for the Sentinel's strength to wane. And wane it will."

If Elara fails to become the next Sentinel, you return to Wyress Demara to tell her the news.

"Our trust in you was well-placed. We do not celebrate the girl's death, but the life of the forest will finally grow to its true potential.
We know it was not an easy choice."
What happens now?
"The forest is its own master now. For too long, it has curbed its will to the Sentinel. To the civilized wild.
I'm eager to see what becomes of it."
Even the Wyrd don't know what will happen?
"We know as much as any creature of the forest doe. We know because we trust the wild to be as it should, and to honor the rite of predator and prey.
That is all the Wyrd wish of any creature, man or beast. And now, we have it."

After you have completed the quest where the Sentinel's power has been broken, Demara will comment on the future.

"Before long, the woods will come alive again. My sisters will warn off unwary travelers. We have no want for any more deaths. We simply wish for nature to take its own course."

In the case that the Princess was successful in becoming the next Sentinel, Demara can be found lurking near the Viridian Lake, watching Elara.

"And now another young one puts the forest under her heel. We will see if she is strong enough to survive on her own. The Wyrd will have no part in this Sentinel's charge."
What about Elara? And Stenwick?
"He understood what the Sentinel meant, but she did not. Perhaps we might have reached some sort of compromise. Or perhaps not.
The Sentinel's mantle was never meant to be used this way. He broke the pact with the forest as far as I'm concerned."