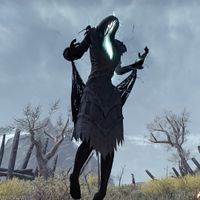 Voidmother Elgroalif is a voidmother located at Four Skull Lookout. She serves as the location's group boss. You will need to defeat her after the Ghostsong clansmen have been killed, interrupting their ritual.

Summon
The Voidmother summons Void Bombardiers and Void Horrors.
Summon Shade
The Voidmother summons Shades.
Singularity
An circular AoE that causes damage over time as well as hindering a player's movement speed while within it.
Void Circles
The Voidmother contorts herself to assume a walking form similar to that of a four legged animal before crashing to the ground. Three Void circles start forming with her as the center, with the farthest one activating first, then the ones closer to her. To avoid this attack, players must dodge roll in a direction opposite from the boss once the circle below them is going to activate. Dodging towards the boss would lead to the player potentially stepping into another circle, leading to a large health loss.
Big Bang
Voidmother Elgroalif teleports to the center of the ritual circle and becomes invulnerable. She summons Void Shields in a square around her, which fuel her damage shield. While invulnerable, she gradually channels a massive AoE. If the AoE grows to full size, it explodes, dealing devastating damage to all standing within it. The Void Rots must be defeated in order for her to become vulnerable once more.
Summon Shade Colossus
Once Big Bang is interrupted for the first time, the Voidmother summons one Shade Colossus.
Summon Spirits
The Voidmother can summon two spectral figures that unleash a ground AoE in a straight line from their vision. Getting caught in this AoE would cause a moderate amount of damage, as well as stunning the player.

Once you have slain the last of the Ghostsong members, she will emerge from her shield and cry out:

Voidmother Elgroalif: "There is no hope. Surrender to the embrace of the Void!"

She can be heard to say the following things during the fight:

During AoE Attack
"The Void will consume you."

Upon Defeat
"Your victory is meaningless. The Void will devour everything!"

This Elder Scrolls Online-related article is a stub. You can help by expanding it.
Retrieved from "https://en.uesp.net/w/index.php?title=Online:Voidmother_Elgroalif&oldid=2462672"
Last edited on 29 August 2021, at 23:14