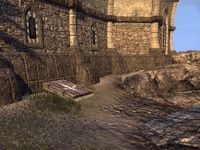 Sentinel Outlaws Refuge is an outlaws hideout situated beneath Sentinel. 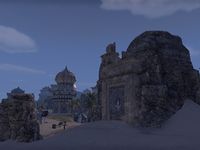 Second entrance outside the city

One of the refuge's entrances is located in the northwestern part of the city, behind the Sisters of the Sands Inn. Another door can be found south of the city, not far from the Sentinel Wayshrine. The refuge's exits are located to the north and south: the northern exit leads into the city, and the southern exit is outside the city, where guards do not patrol.

The refuge's services are divided between the east and west halves of the cistern. A fence named Narkhozikh runs Good & Honest Fencing on the western half of the refuge, close to the southern exit. Quen is standing north of his shop, while Kathalir flips a coin to the south. Sha'ad and Glaz share a drink in front of the store. Marbilah runs her guild kiosk, Marbilah's Mindful Sales, in a spot north of Good & Honest Fencing. Bazbava is sitting on a sofa in front of the stall. Mulimah is relaxing by the canal north of Marbilah's Mindful Sales.

If you head east from here, you'll end up in the middle of the refuge, where Amelie Crowe is fishing. A to-do list lies in the middle of the central walkway, on the floor beside Saadifa, who is busy massaging Fahdah's feet. Aloin Canne plays the lute south of the pair.

Chezan the Overcautious runs his fencing service at Discreet Services & Sales in the northeastern corner of the refuge. Perrine Lozieres looks at the loot east of Chezan's counter. Uazee the moneylender runs Undercity Banking south of Chezan's store. Abiznaz's general goods store, Heart's-Ease Bazaar, is right next door to the moneylender. A book, The Dose Makes the Poison, can be found behind Abiznaz. There is also a cooking fire by the wall to the right of his stall. 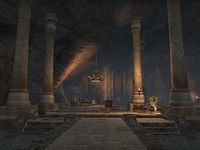 Hideout beneath the desert 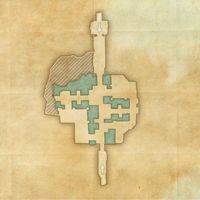 A map of Sentinel Outlaws Refuge