Bull Mastiffs from Morthal in Skyrim are fearless and tireless hunters inured to the hardships of the frozen marshes. The tan variety is a favorite with scouts, hunters, and trackers. 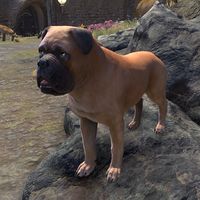 The Tan Morthal Mastiff is a pet obtainable in the Scalecaller Crown Crates as a Superior-level reward. Its default name is "Thaenaar".

The slug-like Sloads of Thras bred the flame-hued Tangerine Dragon Frog so they could be spotted more easily in their archipelago's murky lagoons. Some say they were bred to be pets, but the Sload word for them translates as "snacks." 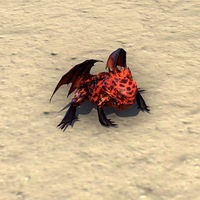 The Tangerine Dragon Frog is a pet available in the Storm Atronach Crown Crates as a Legendary-level reward. Its default name is "Flamekisser".

Craglorn Companions of Belkarth had no luck at all exporting Fellrunners for the High Rock and Hammerfell pet markets—until they sold a flock of the Teal-Faced variety to Fahara'jad's menagerie in Sentinel. Suddenly they were all the rage!"

The Teal-Faced Fellrunner is an upcoming pet. Its default name is "Bluebird".

The large, lumbering Salamanders of southern Tamriel are known for defending themselves with various elemental bursts—all but one, the Toxin Skin variety, which relies on venom instead. Not even the Sapiarchs of the Crystal Tower can account for it.

The Toxin Skin Salamander is a pet exclusively available as part of the Newcomer Pack on Xbox. Its default name is "Poisontail".

Scholars think the iridescent blue Turquoise Nixad must have inherent magical properties, because those wings certainly aren't big enough to enable it to fly. Yet fly it does, flitting about like a beautiful human-shaped hummingbird moth. 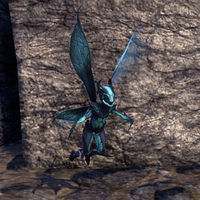 . Its default name is "Beryl". Now and again, it will grab a passing torchbug and eat it.

"These fastidious cats bring the blessing of Tu'whacca and hold a place of honor within their chosen homes. Further, they often start sleeping with any who near death, and thus we venerate them as guides to the Far Shores."—Tanandra, Scholar-Errant 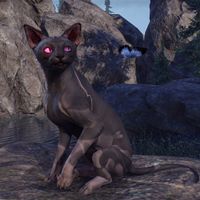 The Tu'whacca's Sphynx Cat is available as a Superior-level reward in Nightfall Crates. Its default name is "Purrbucket".

The most popular conjecture about the origin of the Vvardvark is that it's a magical hybrid created by a rogue Telvanni wizard. The coloration of the Tuxedo Vvardvark, according to this theory, was intended to enable it to hide in a flock of chub loons. 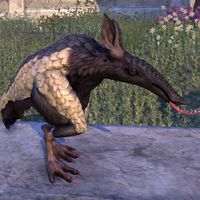 The Tuxedo Vvardvark is available in the Dwarven Crown Crates as an Epic-level reward. Its default name is "Stibbons".

Stories whispered among Nords decades ago told of a reclusive dark-furred lynx that eats the spirits of those who barred from Sovngarde. Imagine their surprise when they found a few domesticated as tent guards during a raid on Reach natives. 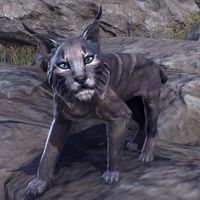 The Twilight Striped Lynx is available as a Superior-level reward in Nightfall Crates. Its default name is "Shadownipper".