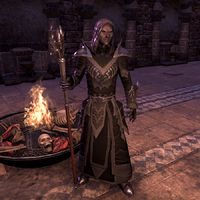 Tutor Riparius is a Dremora merchant found in the Maelstrom Arena. He was created by Fa-Nuit-Hen to help the Demiprince maintain his memories, which rapidly fade if the content is not of a martial nature.

When you first enter the arena:

He can then be spoken to as well as providing merchant services:

"Behold, master―it's that belligerent young mortal whose career on Nirn you've been following."

Speaking to him after the quest is started:

"Remmber, in the arena, an attack might come from anywhere—and everywhere.
Keep that in mind, and you'll do fine."
What can you tell me about yourself?
"I aid the demiprince in several capacities.
His mind wanders far afield at times, and when it returns, his memory is often rather confused. I help him sort out dreams from reality."

After completing the Vale of the Surreal:

"You do appear quite capable. However, I will reserve judgment until I've seen how you perform in the arena."
Tell me more about the demiprince.
"Oh, like a lot of these Daedra Lords, he's so focused on his sphere that he's not all there in other areas. His absolute command of martial styles is formidable—incredible, even. But his memory for all else fades rapidly.
That's where I come in."

"Your combat skills are quite impressive. If they are impressive enough, this could turn out to be very interesting. Very interesting indeed…."
You help the demiprince with his memory? How?
"I act as a sort of peripheral memory storage for him when he goes … dreaming. When he returns, I'm able to remind him of what he's forgotten.
Right now he's upset, because he's losing the capacity to remember his lost Barons Who Move Like This."

Once Drome of Toxic Shock is cleared:

"You've done well. I think, on behalf of my master here, I may begin to be cautiously optimistic."
Can you help the demiprince remember his lost barons?
"I'm afraid not—or at least not well enough.
The barons put so much of themselves into the arenas they created, even their memories were effaced. Only by fully engaging those arenas can their memories be revived."

After Seht's Flywheel is completed:

"I'm beginning to think you might actually triumph in all our arenas. That would be splendid!
Though then we'd have to restock all the non-Daedric monsters. Bother."
Who were these missing barons, anyway?
"Each was absolute master of his chosen style of martial arts! Their skills were complementary, and informed Fa-Nuit-Hen's own combat mastery.
Supported by his barons, the demiprince was the Multiplier of Movements Known."

Upon completing the Rink of Frozen Blood:

"I haven't seen the demiprince so pleased in quite some time!
You've really given him hope that he might be able to reconstitute his missing barons."
So Fa-Nuit-Hen is nothing without his barons?
"Not at all! He is diminished, of course, but far from nothing!
He is still the ruler of his own pocket realm, absolute master of everything you see. The barons built the arenas, but it is the demiprince who activates and powers them."

"Watching you perform so splendidly in the arenas is educational for our trainees—and so inspiring. They can hardly wait to start murdering atronachs on their own.
It must be so heart-warming to be regarded as a role model!"
Why are the Maelstrom arenas so different from each other?
"Maelstrom is what's known as an Oblivious Vortex―fragments of creatia drift here from all across the planes.
So the barons had a variety of materials to work with when building their arenas. And they took inspiration from their travels, as well."

Upon completing the Vault of Umbrage:

"I must say, you're doing a very respectable job of carving your way through our arenas.
And every time you do, it restores the baron who created that arena to the mind of the demiprince. So keep it up."
What can you tell me about yourself?
"I? I am a creature of Maelstrom, a factotum generated by my master's needs, changing as his requirements change.
Sometimes there are even several of me. But I don't care for that―it leads to awkward situations."

"Your dexterity in that last arena was dazzling. You're really quite nimble for a mortal.
My master will tell you he learned some of his best moves from mortals. Tamrielics, he says, are always full of surprises."

Where did Fa-Nuit-Hen come from?

"Oh, dear me. What a question! Come from? By and large, the greater Daedra simply … are.
Where do you "come from" if you've existed since before time began?"

Are you eager for the barons to return?

"Eager?
I'll be happy for the master, of course, but just between you, me, and the endless void, the Barons Who Move Like This are not the easiest Daedra to coexist around. Haughty. Demanding. And they don't have much respect for tutors."

When you speak to him after completing the Theater of Despair and Maelstrom Arena he will say,

"I hear some of the trainees are already trying to duplicate your best arena moves.
You've definitely made an impression on the realm of Maelstrom!"

When you are fighting in an arena, Tutor Riparius will be spectating in the crowd and may give commentary:

"This fight is developing nicely!"
"I am cautiously optimistic about this one!"
"I wish I'd placed a side wager on this!"
"This looks promising!"
"Now we'll see something memorable."
"I used to be able to fight like that!"

"The baron who built that last arena was one of the demiprince's favorites. I'm delighted to see that your performance has restored the baron to Fa-Nuit-Hen's memory.
So, please, don't stop now."

This Elder Scrolls Online-related article is a stub. You can help by expanding it.
Retrieved from "https://en.uesp.net/w/index.php?title=Online:Tutor_Riparius&oldid=2019305"
Last edited on 19 September 2019, at 11:38