Sai Sahan received a letter from Abnur Tharn. It seems the old battlemage discovered something about a threat to Southern Elsweyr and needs our help. 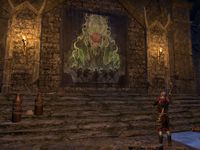 Sai Sahan has received a troubling letter from Abnur Tharn, an old acquaintance of his. He would like to see you in Nahfahlaar's Chamber. Sai tells you that Nahfahlaar has been acting strangely, and asks you to go speak with him. Nahfahlaar is unamused, having heard everything Sai said. Nahfahlaar confesses that he's felt something is off before warning you of an incoming portal. Investigate the portal. Lo and behold, none other than Queen Khamira and Abnur Tharn themselves come out of the other side. Speak with Abnur Tharn (if you'd like, you can catch up with Khamira as well). He tells you what you already know first: that he's been writing back and forth with Sai Sahan. He then tells you something you didn't know: he's knows about Kaalgrontiid's base of operations. He just needs your help getting there.

The island of Dragonhold is where Kaalgrontiid is leading the Order of the New Moon out of. The place is protected by powerful magic, so Abnur Tharn can't use a scrying spell to find the place. You mention the altar with the aeonstone that you and Caska interrupted a ritual at in the New Moon Fortress. You have the option of speaking with Caska about the fortress, but your next task is meeting Sai and Tharn in front of the complex. When you arrive, Sai hails you. Abnur looks exhausted. The entrance to the fortress has been put out of use (translation: the cultists have stopped using it and barricaded it from within after your little escapades in the fortress), so you'll need to find another way in. Follow the river west until you find another door. This one isn't locked from the inside. Head forward until you reach the hallway leading to the amphitheater, where the ritual you disrupted was. You can hear the voice of Kaalgrontiid booming from outside. Head on out into the amphitheater and confront him. He was commanding minions to enter a portal before you arrived, and he flies off before you can have any sort of substantial interaction. 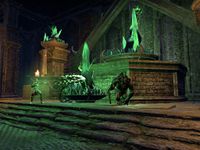 The portal is gone, and Abnur lets it loose that the aeonstone in the courtyard has a special property. It absorbs life energy and holds a charge from said energy. He's drained, and suggests that you touch the three chunks of aeonstone so that he might use the empowered stones to open a portal to Dragonhold. Do as he says, and he miraculously manages to open a portal without throwing out his shoulder. Now exhausted again, Abnur tells Sai to get the Dragonguard ready back at the Sanctum while you and the battlemage investigate Dragonhold. Sai begrudgingly agrees. Enter the portal.

You end up in what appears to be an underground ruin. Tharn informs you of an exceptional magical presence in the ruins. He has reason to believe the island is protected by an aegis, a shielding spell of some kind. You should find the source of the aegis to lower the island's defenses. Explore the halls. You'll eventually come across a tapestry. Tharn studies it, and deduces that it depicts some sort of religious concept. He recognises it as a myth about some sort of "new moon". The Khajiit recognize more than one moon, but only two are named in mainstream Khajiiti culture: Jone and Jode. The tapestry suggests the rise of another moon, a new one. 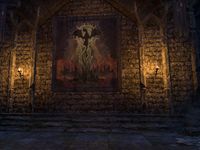 Move forward into the courtyard. Beyond the door lies Joorahmaar, who instructs a group of cultists to sacrifice themselves in a ritual in the name of the New Moon. Tharn suggests that you stop said ritual. Enter the halls to your left or right. At the end of each hallway is an aeonstone focal point, guarded by Dark Aeon Penitents. Defeat the enemies by each ritual site and destroy each focal point. Tharn tells you that he'd like to try absorbing the power from the aeonstones. He does so, and destroys the aeonstone formations in the process. Hopefully, he can use this energy to summon a portal in the case an emergency arises, or perhaps use it to confront the cult and its Dragon overlords in a pinch. Continue to search for the aegis. You'll end up back on the balcony where you saw Joorahmaar command the cultists. He approaches you, and Abnur Tharn uses the energy he absorbed from the aeonstones to blast Joorahmaar with his magic. Joorahmaar recoils, then retreats. Tharn suggests finding him, as he's likely gone to a protected location to nurse his wounds. What place would be more protected than the source of the magic providing the island its aegis? Head into the door beside the southern tunnel. Exploring further grants you the sight of another tapestry. This one actually has a Dragon on it. Tharn speculates that the Dragon is Kaalgrontiid, and that he seeks to become the New Moon depicted in the other tapestry. He comes to the conclusion that the tapestries aren't just illustrating a myth, they're showing what the Order of the New Moon believes to be a prophecy; one that Kaalgrontiid seeks to fulfill. 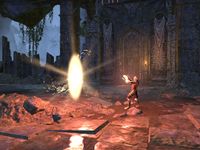 Keep moving forward and you'll reach Joorahmaar's location. Kaalgrontiid is here. Abnur Tharn channels his magic to destroy the aegis. Fight off Joorahmaar as he does this, and kill the Dragon. Tharn destroys the island's protective shield and Kaalgrontiid flies off, insisting that his prophecy will come to fruition. The tremors the island has been experiencing intensify greatly. You need to find some way to escape. As you run back through the ruins, it becomes apparent that the island is somehow in the air. It's a dead end. Abnur Tharn decides to use what little strength he can muster to send you back to the mainland. He tells you not to worry about him. With the aegis destroyed, the Dragonguard can now assault the island. Tharn tells you to gather the Dragonguard for this purpose. Head through the portal and speak with Khamira. Tell her and Sai what transpired on the island, then regroup back in the Sanctum. Speak with Sai Sahan in Nahfahlaar's Chamber for the next step in your grand plan.

This Elder Scrolls Online-related article is a stub. You can help by expanding it.
Retrieved from "https://en.uesp.net/w/index.php?title=Online:The_Dark_Aeon&oldid=2649728"