< Elder Scrolls Online: Quests: Thieves Guild
Before the Thieves Guild sends me after more lucrative targets, I need to prove I know how to pick pockets. 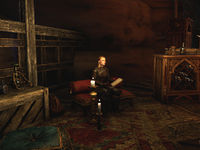 Return to Kari after you have completed your first task for the Guild.

After you have completed Partners in Crime, this quest automatically becomes available on the Tip Board inside Thieves Den. The message on the board reads:

"Some new faces in the Thieves Guild. Before we send you to pick the pockets of bigger and richer targets, we need to know you can handle yourself.
Lucky for you, the Iron Wheel has pulled their patrols out of Abah's Landing."

"Go pick a few pockets. Your best bet is Abah's Landing, but anywhere in Hew's Bane will do. Note: scorpions don't have pockets.
"Nab a few personal items, or a lot of treasures. Fence what you find, but report back to me."

The quest will point to Abah's Landing for targets, but pickpocketing anyone in the zone of Hew's Bane will work.

For the purposes of this quest, personal items include:

Once you have gathered the needed items, return to Kari at the Thieves Den.

I picked a variety of pockets.
"Wish everybody was making the same effort. let's see what you've got. Mm. Mmhmm. Not bad. It's yours, plus a little extra for the effort."

She will reward you with a Small Laundered Shipment and some gold. After completing this quest you can immediately begin to accept other Larceny quests from the Tip Board, as they are not limited to one per day.