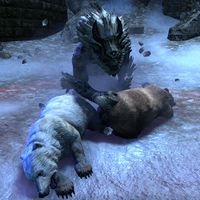 Teethnasher the Frostbound is a frost troll miniboss found in Direfrost Keep. It is constantly surrounded by shards of ice. It is an optional miniboss that is not required to complete the dungeon.

As a boss type enemy, Teethnasher is immune to all forms of crowd control effects.

Slap
A basic melee attack that does minor physical damage.
Freezing Gale
The boss has a frozen aura constantly surrounding it that deals moderate frost damage over time to all players near it. To counter this, the tank should taunt the boss and hold it still; most tanks should be able to withstand the damage with some healing allowing the rest of the group to safely kill the boss from range.
Lunge
The boss lunges towards far targets to close the gap, dealing moderate physical damage and snaring them. This attack is only used if players are too far from him.

This Elder Scrolls Online-related article is a stub. You can help by expanding it.
Retrieved from "https://en.uesp.net/w/index.php?title=Online:Teethnasher_the_Frostbound&oldid=2398830"