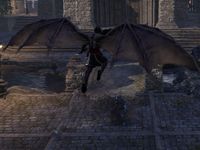 Dragon Leap deals physical damage to all enemies in the area around your target, and knocks them back. It is very effective at disabling a crowd for a short time. The Take Flight morph increases its range and damage, and reduces the cost, so it can be used more frequently. Or you can use the Ferocious Leap to give yourself some protection in the form of a Damage Shield after your leap, while also dealing Flame Damage.

1.2.3
* This ability's minimum range requirement has been removed.
1.6.5
* Reduced the cost of Dragon Leap and the morph Ferocious Leap to 125 Ultimate.
2.3.6
* Fixed an issue where you were unable to attack if you sheathed your weapon after casting a charge or leap ability, including:
2.7.5
* The damage and knockback from this ability and its morphs can no longer be dodged.
3.1.5
* Fixed a specific case where some charge and leap abilities (such as Critical Charge or Dragon Leap) were displaying their animation and visual effects but not actually moving you to the enemy target.
4.1.5
* Fixed an issue where a load screen could pop-up when using short teleport abilities, such as Dragon Leap.
4.2.5
* Fixed an issue where this ability and the Take Flight morph did not improve as they ranked up.
5.0.5
* Increased the radius of this ability and its morphs to 8 meters from 6.5 meters. It also now applies a more aggressive snare to targets it is cast on, to prevent them from being able to outrun the AoE damage when it lands.
5.3.4
* This Ultimate will now properly animate its leap on targets, regardless of its range, resulting in more overall reaction time for those on the receiving end of being DK dunked.
Retrieved from "https://en.uesp.net/w/index.php?title=Online:Dragon_Leap&oldid=2697428"