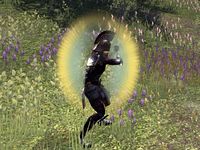 A character affected by Sun Shield

Sun Shield applies a Damage Shield to you. Enemies nearby take Magic Damage on cast, and increase the shield's magnitude. The Radiant Ward morph reduces the casting cost and further strengthens the shield based on the number of enemies affected, while the Blazing Shield deals damage to all enemies at the end of the effect based on how much damage it absorbed, rather than a fixed amount at the beginning.