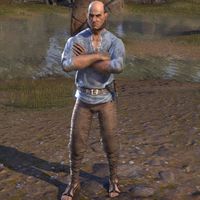 Stenwick Gurles is a Breton and the current Viridian Sentinel who lives in the Viridian Woods, before he became the Sentinel, he was a royal gardener until he decided to live in the woods. This is where he he met the previous Sentinel who he helped until the mantle was passed to him.

He recently came across the gravely injured Princess Elara and is nursing her back to health, though he could use some assistance in healing her.

He can be first encountered, after finding the comatose princess on an altar in the middle of the lake, Stenwick will walk up behind you.

He can then be spoken to.

"As the Sentinel, I must warn you that these woods aren't safe. But as Old Gurles, I'm glade to see a friendly face.
I remember when that child wasn't more than a knee's height, and now she's laid out like a corpse."
Will she survive?/Will the princess survive?/Will she live?

"She was attacked and left for dead by the wayside, like a beast. Well, she won't die on my watch, not if you can help me.
Around the lake, you'll find rings of mushrooms. Fairy rings, but fairies aren't what I need."
What do you need?
"Take my amulet. get down in the center of the rings and feel the earth. I need the energy from there to keep Elara alive.
I need to take the child back to my hut. It's just up the hill a bit. Can't miss it."

You're the one called the Sentinel?

"The Wyrd won't call me anything different. Most people who live around here call me Old Gurles, or just Stenwick.
"The Viridian Sentinel" is a bit of a mouthful, don't you think? Makes me sound more important than I really am!"
What exactly is the Viridian Sentinel?
"These woods have a life and mind of their own. Well, what I do is make sure it doesn't get out of hand.
There are some good folk who live near these lands, and without a firm hand, why, the wild would grow right over them!"
How did you become the Sentinel?
"Me? I'd left Evermore and decided to live my life in the woods. And met a man here, the previous sentinel. He needed help, and I stayed with him.
When he grew too weary, he blessed me with the title."
How long ago was that?
"A long, long time ago. Once, I even worked as a royal gardener in Evermore. But, well, I'm more comfortable in the woods. It's where I belong."

"Yes. Princess Elara, daughter of Queen Arzhela. I rescued her from a near fatal attack. Her mother still thinks her dead.
I know it seems callous, but that's how it must remain, for now. I've no wish to break the poor woman's heart twice."

Speaking to him again before leaving to do as Stenwick asked:

"I need to finish drawing what energy I can, and then get Elara back to my hut. I've done all I can for her here."

Once you have acquired what he needed, he can be found in his home.

"If I was younger, I could instantly purge the poison running through this young lady's veins.
Now it takes all my strength just to keep her breathing, the poor dear."
Here's your amulet back.
"Just in time! I've made a salve for Elara that'll help her wake. I'll channel what energy I have into her.
The amulet should be able to sustain me afterwards. At least, I hope it will."

Speaking to him before awakening the princess:

"I'll be all right in a few moments. Seems my old age is catching up to me. Happens to all of us eventually, I suppose."

Speaking to him after waking up the princes, but before talking to her:

"She's awake, thank the Divines. Let her know she's safe, for now.
The forest will keep her safe."

Once Princess Elara awakes, Wyress Demara will arrive and have a mildly threatening conversation with Stenwick.

After this, Stenwick can be asked about it.

"The Wyrd and I have always had a tenuous relationship. But saving Elara was something I needed to do, regardless of their objections.
It will make this process harder than it needs to be, but I still have some spirit in me yet!"
Why does she object to you saving the princess?
"Ah, it's quite complicated. Suffice to say, they don't think I should use the forest's power for such things. Of course, they'd much rather I didn't exist at all!
But it changes nothing. There's work to be done, and I'm not getting any younger."
Elara seems to be cured. What more is left to do?
"My salve was but a reprieve, I fear. In order to safeguard Elara, I need to do something drastic. And I'll need the Wyrd's help.
You've seen the spriggans of the forest, I'll bet. There's one that's much older and much wiser, than the rest of them."
What's important about this spriggan?
"Some call her the Voice of the Forest. In a way, she is. I need a bud from one of her branches, one freely given. It can harness the full power of the woods to safeguard Elara's life.
May I ask your aid once again?"
Of course. What do you need?
"Find the Voice of the Forest. It shouldn't be difficult to find. But, if you must ….
Many spriggans carry a spore that returns to the Voice of the Forest when the spriggan dies. You could kill them and follow it to the voice, but certainly won't make it very happy."
I'll get the bud from the Voice of the Forest.

You can ask him more questions once you accept the task.

"Take my amulet. Its power is spent, but the Voice of the Forest will recognize it and grant you an audience.
Wyress Demara may not welcome you when you take the bud to her, but persevere. She knows what the Wyrd must do."
I'd like to know why the Wyrd don't want to help you first.

"They are guardians of nature in the truest sense. And I am a guardian of the people. Our interests don't always coincide.
They see my role as Sentinel as unnatural, though the Sentinel has existed for generations."

Why are you helping Elara?

"It's a long story, one that's hardly worth the breath to tell. Hmm. How should I explain this?
In another life, I owed the queen a debt. When her daughter needed aid, I had to help."
[Persuade] The Queen of Evermore? You can't tell me any more than that?

"I know you mean no insult with your questions. I just thought I'd be rid of my past by now.
When we first met, she was Lady Arzhela of Wayrest: a firebrand married to King Eamond some twenty years back. That seems so long ago now."
Why did she marry King Eamond?

"For peace, if only for a generation. Lady Arzhela's marriage bound Stormhaven and Bangkorai in kinship.
Blood's a hard bond to break, even in the most trying times. That was reason enough for the marriage. I think in time, she even came to love him."

How did you meet her?

"Me? I was a simple gardener for the castle in Evermore. Lady Arzhela sat out there when she was homesick.
Sometimes, she'd talk to me about Wayrest and her old life. We became … quite close."
How did you come to be here then?
"Oh, I knew the gossips would've wagged their wild tongues and ruined the queen's reputation. I cared for her too much to let that happen, so I left.
Now fate's given me a second chance to help my Lady Arzhela … and I will."

Speaking to him after you have the spriggan bud:

"Make sure to watch your step. These woods are not as friendly as they used to be."

Eventually you will be sent back to the Sentinel's home where you will find him on the ground.

"Ah, I was hoping you'd return before … I couldn't speak to you one last time.
It's good Elara's not with you. I'd hate her to see me in such a state."
What happened?
"Time, my friend. I gave my everything to heal Elara, and still it won't be enough. That's why I sent you to get the spriggan bud.
The only way she'll live past a fortnight is if she becomes the Sentinel. Luckily, there'll be a vacancy shortly."
How will being the Sentinel help her?
"In a sense, the power of the Sentinel is immortal. I'm old, but Elara is young. The Sentinel's power will take root and flourish in her.
The Wyrd fear what she will become, but you can't let that stop you. Take my essence, when I'm gone. Save Elara."
What should I tell Elara?
"Tell her she must tame the will of the woods. The bud will summon, and the amulet will bind. The Wyrd certainly won't help, considering they'd much rather see this power go to waste.
Don't let the Sentinel's power fade. It must live on in Elara."