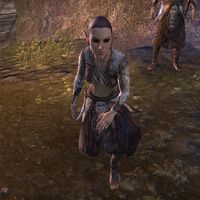 Spinner Endrith is a Bosmer spinner of Ouze, guarding it from those who would disturb the Changeling spirits buried there. When approached, she will urge you to rescue her fellow spinner, Indinael, and defend Ouze from the Worm Cult.

She can initially be found on the road near Ouze.

"We've got to save her before it's too late!"
Save who? What's happened?
"Spinner Indinael tried to stop the Worm Cult from defiling this burial site. They took her! I saw her near the center of Ouze, held captive at one of the altars.
I can't imagine what they'll do to her if someone doesn't stop them!"
What's a spinner doing at a burial site?
"We guard the ancient burial site of Ouze from those who'd disturb the spirits. But that part of the story's not important yet! You have to save her!
Go along the road. Look for the altar in the water. Please!"
All right, I'll look for Spinner Indinael.

Outside the Cave of Ouze:

"They've taken her inside, haven't they? Are we too late?"
It seems so.
"Then all is lost! The stories tell of a dark creature, fueled by pure essence at its core. That is Spinner Indinael.
She will become a terrible undead being, a servant to command the legions of the Worm Cult. They make her their puppet!"
There must be a way to stop it.
"Wait. You have it … the totem of Y'ffre! She must have known, must have seen her fate! She's sent you to save her!
You need to get inside, and quickly! The Worm Cult's already started their plans. You must use the totem to stop them!"
How do I use the totem?
"Use it on the creature you find inside the caves.
The Worm Cult controls it now, but the totem may be able to break their power over it. Or even destroy it entirely."
I'll do what I can.
"Take down as many Worm Cultists as you like on your way through the cave! They deserve a thousand times more for what they've done!
As for the creature, use the totem of Y'ffre on it once it's weakened. If you don't, it'll just revive again."

Once you've rescued Spinner Indinael, she and Spinner Gwilon will be waiting with Ininael's spirit:

"You've saved the Spinner! Now, she can join the other spirits in eternal slumber. Thank you!"
"In my story, I'll be as strong as Indinael! Someday."

"Well, even if Spinner Indinael is going to stay for a while longer … I'm certain Gwilon and I will work things out."

This Online-related article is a stub. You can help by expanding it.
Retrieved from "https://en.uesp.net/w/index.php?title=Online:Spinner_Endrith&oldid=2198411"
Last edited on 20 August 2020, at 01:44