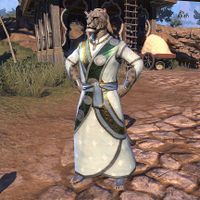 Silhu-jo is a Khajiit adept and healer found at S'rendarr's Cradle. He is the first among equals within the adeptorium and raised Vazbi from a kitten after she was orphaned by the Knahaten Flu.

Approach the adeptorium and you'll hear the following exchange:

Vazbi: "We must do something about the water, Silhu-jo! If you would just—"
Silhu-jo: "No adept can face the wastes alone, child. This one insists you stay."

Speak to him before starting the quest and he'll tell you:

"This one is sorry you had to see that, walker.
Silhu-jo does not like to issue commands like this, but Vazbi suffers a kitten's impatience sometimes. Perhaps you can talk some sense into her."

Speak to him after talking to Vazbi, you can ask him:

"Silhu-jo has misgivings—many misgivings about letting young Vazbi investigate the aqueduct. The spirits sing of your strength. This one finds some peace in that, at least.
Please, just keep a close eye on her. Vazbi is precious to Silhu-jo."

Why are you worried about Vazbi trying to restore the water?
"S'rendarr's Cradle is aptly named, walker. The sick find peace, comfort, and security here. The world outside our walls offers little more than temptation and death.
Silhu-jo does not want Vazbi, or any adept, to face those dangers needlessly."

But won't you run out of water soon?
"Caravans from Hakoshae and Rimmen bring water for our cisterns now and then. It will sustain us, for a time.
Should the problem not resolve itself before our water runs out completely, then we will have to see what S'rendarr intends for us."

What is this place?/Can you tell me more about this place?
"S'rendarr's Cradle? It is a home for healers and a safe harbor for the sick, the infirm, and the dying. With the light of the moons and S'rendarr to guide us, we tend to those who have no one else to turn to."

Are you in charge?
"In moments where leadership is needed, the adepts turn to Silhu-jo, yes. But S'rendarr works through all of us equally to heal and bring comfort to those who need it."

In Baan Dar's Litter, after Vazbi is kidnapped by stricken, Sihu-jo will hail you from his hiding spot:

"Silhu-jo saw everything. We must save Vazbi, quickly! Please!"
Silhu-jo? What are you doing here?
"I may not be Vazbi's father, but I feel a father's love for her. What parent would let their child wander the khaj with a stranger? Silhu-jo followed at a distance, but could not stop Vazbi in time.
The Stricken cats took her deeper into the canyon."
The leader called Vazbi by name and urged his people to burn S'rendarr's Cradle. Why?
"The flu …. Time heals some wounds and causes others to fester. Sometimes, even the greatest healer cannot see all ends. Forgive me. Silhu-jo is an old cat. He rambles.
We must go to the Baan Dar Gate. To halt the flames and save my Vazbi."
All right. Let's go save Vazbi.
"There is a cavern deep within the Litter. If memory serves, it ascends to the Baan Dar Gate. We will find the aqueduct blockage and Vazbi there.
Come. We must hurry."
What's your plan for saving Vazbi?
"Silhu-jo will try to make these sick-scarred cats see reason. To cure a sickness, a healer must know the ailment's cause. Old hatreds are not so different.
We lose time discussing this. Have faith that all will proceed as S'rendarr wishes."

As you travel to the Gate, he will tell you about how the Stricken came to be. You can talk to him at each point, whereupon he will elaborate on it.

Silhu-jo: "These sick-scarred you see—we call them the Stricken. After the Knahaten Flu ravaged their bodies, the people of Elsweyr cast them out."

Speaking to him here:

"There is a cavern deep within the Litter. If memory serves, it ascends to the Baan Dar Gate. We will find the aqueduct blockage and Vazbi there.
Come. We must hurry."
Can you tell me anything about the people that kidnapped Vazbi? (The option will change)
"Silhu-jo thinks he knows who they are, but he prays he is wrong.
Travelers come to S'rendarr's Cradle with stories of the Stricken—Khajiit touched by the Knahaten Flu. Marred by the sickness, but not killed by it, you see?"

Silhu-jo: "They came to S'rendarr's Cradle once. For healing. But the king's vizier would have put our adeptorium to the torch if he knew we harbored the sick."

Speaking to him here:

The Stricken came to S'rendarr's Cradle for healing?
"Yes. When the outbreak began, Khajiit came to the adeptorium in ones and twos. We cared for them as best we could, but few survived.
Even so, rumors spread that the sick could find healing within our walls. Sick cats began arriving by the dozens."
And then?
"We stripped our adeptorium clean to accommodate everyone. We tried our best, despite the cramped quarters. Then came Sutabi, vizier to King Hemakar.
He led a host of war-cats to the Cradle and vowed to raze it to the ground to halt the infection."
Did that sort of thing happen often in those days?
"Few understand what the Knahaten Flu did to my people. Not just the illness and death, but the fear and hatred it stirred in us. It lingers still, like a sickness of the soul.
Time moves away from us while we talk, friend. We must find Vazbi!"

Silhu-jo: "You should know the reason they hate us. It is my fault. They wish to burn our home because I cast them into Baan Dar's Litter, to die."

When you talk to him , he will reveal the reason why the Stricken hate the adeptorium so much and his role in this:

"The Stricken are the ghosts of my past. Of the Cradle's past. Silhu-jo hoped that time and seclusion might let them heal on their own. But that was always a fool's hope. The sickness made its way to their souls and festered there."
What are you talking about? You tried to kill the Stricken?
"In the days of the flu, chaos reigned. Many came to S'rendarr's Cradle, seeking healing.
But fear followed the flu. With so many of the ill huddled in our adeptorium, the people saw it as a breeding ground for more sickness."
So, what happened?
"Sutabi, the king's vizier, marched on the adeptorium and threatened us with torch and sword. If the sick remained in the Cradle, he vowed to burn it to ash.
So, I ushered the sick and dying here, to Baan Dar's Litter, and left them. To die."
The other adepts let you do that?
"They had no choice. We had no choice.
When you tend to the sick for as long as Silhu-jo has, you cannot help but grow detached. Callous, even. If I kept the sick with us, many healthy Khajiit would die. Khajiit like Vazbi."
What does Vazbi have to do with this?
"Vazbi's parents came to us, carrying her in swaddling clothes. They were both near death, or so I thought. But Vazbi, their child, was healthy as the spring.
What could this one do? Her parents had no chance, but she did. I took her in. Raised her."

You have the option of talking with him:

"Before we go further, we must speak."
What is it?
"The Baan Dar Gate lies beyond that door. The Stricken's leader, as well—Vazbi's true father. His love and sorrow has turned to hatred for me.
Silhu-jo has no illusions. Death waits for this one through this passage, for the actions of his past."
Do you really believe that?

"Silhu-jo does not fear this death, if it will save Vazbi.
Before it happens though, this one must ask. You now know the story of S'rendarr's Cradle. Of the sick left to die. When this one is gone, Vazbi will have questions. What will you tell her?"
You had an impossible decision to make. You don't deserve to be judged for it.

"Silhu-jo thanks you, walker. Choosing who lives and who dies weighs on the soul, but as a healer and a leader, I must make hard decisions. If Silhu-jo had to do it all over again, he would make the same choice.
Now, come. Vazbi waits."

You swore to heal the sick, but instead you left them to die. What you did was murder.

"Yes. This one knows. Silhu-jo has prayed on this for eighteen years. He still hears the ghosts of the sick cough and wail every time he goes to sleep. But if we had let them stay, many more would have died. I had no choice.
Come. Vazbi waits."

I haven't made up my mind.

"Silhu-jo understands. It can be difficult, to know what to do in such a position. But this one cannot say what he did was wrong. As loathsome as it was, as cruel … it was not wrong. I only hope my child will understand.
Now, come. Vazbi waits."

Actions of the past? What do you mean?
<same as above about the fate of the stricken>
Let's go.

He will head in before, once you reach him he will be trying to reason with Hulzar to no avail:

While Vazbi will initially say he is seriously injured, but when you return to S'rendarr's Cradle, he will have perished from his injuries.