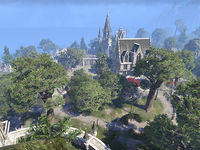 Sil-Var-Woad is a zoo in southeast Summerset. It is found along the southeast coast of the region, south of Shimmerene and northeast of Sunhold. The zoo is the site of The Royal Menagerie, which holds exotic animals from all over Tamriel, though they have recently gone rogue and overtaken the site. 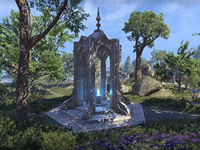 The Sil-Var-Woad Wayshrine is located by the road north of Sil-Var-Woad. The Axle-Creak Caravan Company, a general goods stall run by Virumariel, is nearby.

This Elder Scrolls Online-related article is a stub. You can help by expanding it.
Retrieved from "https://en.uesp.net/w/index.php?title=Online:Sil-Var-Woad&oldid=2389607"
Last edited on 15 April 2021, at 06:06