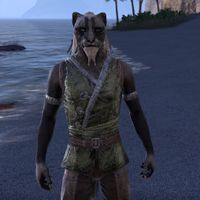 Shazar the Sibilant is a Khajiit entertainer found outside the Moonlit Cove temple. He will ask for your help to cleanse the sacred shrines of the polluted water from the Ruddy Fangs skooma operation.

When you first meet him, he will warn you away:

"Stay back, stranger. The shrines are shuttered and the sea waters stagnant and squalid.
Or are you part of the syndicate, here to savage the Moonlit Cove?"
Someone's desecrating this cove?
"Yes! Sacrilegious smugglers and sugar-tooths! They came in their skiffs and turned our sacred shrines into skooma stills! Now the waters stink of their scummy stock.
Shaveskins, the lot of them!"
Is that serious?
"Should our shrines stay soiled, the sojourners who seek sanctification here will steep in soured skooma! Shazar shudders to surmise what sickness spawns from these suspect waters!
It must be expelled!"
I'll help fix your skooma problem.
"S'rendarr sends me a saint! To sanctify the shoal you must seek the sacred shrines inside Moonlit Cove and sip from their source. Swallowing the sacramental waters will suffuse you with their sanctity, and the skooma.
Then we send it out to sea!"

After agreeing to help, you can ask him some questions about the situation. Namely why you need to drink the tainted water:

You want me to drink the sullied water?

"Steady, sleek one. The sparkling waters streaming from the shrines are sacred! Their spiritual strength will safeguard you and allow you to sanctify the shoal once more. Shazar is seldom mistaken."

Why did smugglers take over Moonlit Cover?
"To strip the sacred sugar suspended in the shoal's shallows. All the light Jone and Jode shines upon the sea surges into this cove and mixes with the spring waters spilling from our shrines and settles on the shoal, ensnaring the moonlight within."

The cove is full of trapped moonlight?
"Assuredly! It sparkles like strands of sapphires sailing on the tide. Before the cove was spoiled by these scoundrels, soaking in the sweet waters brought Khajiit perfect serenity.
Now the spoiled waters stir only sickness and insanity."

What do you mean?
"Shazar has heard screaming and shouting from within the cove. The senseless shrieking of sugar-tooths whipped into hysteria. The skooma these sinners swill stinks of unsavory scum!"

Is that what I'm smelling?
"Surely! Though Shazar slogged many days across the Scorch to soak here, so the stench may stem from him…"

Once you have drunk water from the shrines, you can return to Shazar to see what you need to do next:

"Ah, stranger! You're sodden to your skivvies! Have you supped on the shrine's waters?"
My stomach is full of sacramental water and skooma. Now what?
"You are looking somewhat sallow. Best not to let the sickening skooma seep in too deeply.
Step into the shallows my squeamish savior and spit all that poison out to sea!"

After you have thrown up the skooma water into the sea, you can complete the quest:

"Shazar has never seen such a tsunami of spew! Surely it was a sobering experience, but you've spared Moonlit Cove a similar fate."
So, the cove is cleansed?
"S'rendarr's salty tears, yes! This sanctuary is safe again. Someone will still need to strong-arm these smugglers into shoving off, but Moonlit Cove will survive.
Take this as Shazar's show of support! May Jone and Jode shower you with succor." 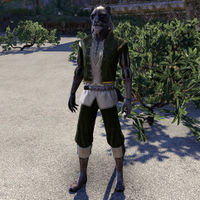 Shazar in his alternate outfit

After you quest is completed Shazar will have changed outfits and can be spoken with some more, he can be asked about his occupation and the cove:

"Shazar soon hopes to shed his soiled clothes and scrub until he sparkles.
Then, back to Senchal for another show. Only there, Shazar hopes to be showered in treasures."

If the smugglers aren't driven out, won't the cove become polluted again?

"Not for some time. The ceremony you performed stirs the sacred source of the shrines and instills the shoal with the same spiritually spotless supply. Their spouts will spray streams of sacramental water to sluice the despoiling skooma out to sea."

You still plan to soak in the springs?

"Shazar did not cross the sweltering Scorch only to spin 'round and slink back to Senchal like a smitten Senche! Since you've shored up the situation inside, Shazar suspects the unscrupulous schemers will scatter like skeevers soon enough."

Are you some sort of performer?

"Just so! A singer, a tale-spinner, and spinner of tails. Shazar regrets that you see him in this sorry state, but his thespian spirit shone through his sloppy appearance!
Or his manner of speaking suggested so."

If you cleansed Moonlit Cove before finishing the zone story's epilogue, he appears at the ceremony near Daini, Safik and Sormund.

"Salutations! Shazar sees that S'rendarr smiles upon your struggles! Such a ceremonious series of circumstances this one cannot summon from memory!
Shazar is grateful to have showered before such a celebration."
How are things at Moonlit Cove?
"The springs sparkle again and the smugglers are seeking shelter somewhere else. There are stragglers, of course, but the skooma stills have stopped spilling their slop in the shrines and shoal.
Shazar thinks you are deserving of a soak yourself."