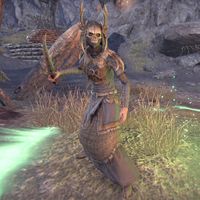 Shamans are a class of hostile humanoid NPCs that attack using both melee and nature magic abilities. They are usually equipped with a dagger.

The enemy summons an Aura of Protection totem that gives nearby allies increased resistance to damage. The totem can be destroyed in five hits from any source or one heavy attack. Destroying the totem will stun all enemies nearby.