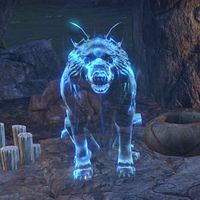 The Shade of Ulthorn is a remnant of The Hound prior to his encounter with Hircine. It takes the form of a spectral wolf and transports you to The Hunting Grounds from Wilding Run, and guides you to Captain Trelano along the way.

On the cliff overlooking the Strid River at the Wilding Run, you'll find a spirit form of a wolf:

"He's trapped. Captured with a snare of Daedric magic. He will be made into the ones you have fought, or killed if proven too weak. If you wish to free him, be warned. You may take his place!"
Who are you?

"One who is eager to end the horrors of this place. I am a shadow of Ulthorn, the one who is called the Hound. I seek to make amends. We should make haste. He slips further away with every breath."

Take me to him.

"Prepare yourself. The journey is difficult."
I am ready.

"Close your eyes. Be swift. There is not much time."

After being transported to the Hunting Grounds, he will say "Watch your step!"

"Are you ready to free your friend? Not much time left."
I can't see anything.
"Allow me to clear your eyes.
There. A bit more in … focus."
Where are we?
"A prison of the mind. Built for who I once was. Hircine gazed into my soul, turning memories into a torturous labyrinth.
One part of me escaped. And Hircine made it into a weapon."
Where is Captain Trelano?
"Deep within the prison, where Gamekeeper Ozzai cracks his mind like a nut. If she succeeds, she will hollow him out and make him into one of her servants.
His shell will roam Nirn, hunting and killing everyone he ever knew."
"How do I get to him?"
"Simply pass this barrier. See the items on the table? Three memories, meant to steel a Hound's resolve.
Choose correctly and the barrier falls. Choose poorly … and her servants will have fresh prey."
Who are you?
"An echo of Ulthorn, before he became the Hound. When he left this place, his hunt for the Green Lady consumed him. Exactly as Hircine intended.
Everything else was left behind. I was left behind."
What is this place?

"A forge. Instead of steel, it shapes flesh. Instead of fire, it stokes the soul. Here, Hircine crafted his Hound. A living weapon driven by passion. Gamekeeper Ozzai is not so discriminating. They build a crude army of dead flesh."
Who is Hircine?

"Hircine, a tyrant from Oblivion. Hircine, who is Half the Conscience of Man.
He is the father of werebeasts, and thrills in the hunt, no matter the prey."
What does Hircine have to do with the Hound?
"I was a hunter once. When the Green Lady rejected me, I searched for aid. I came to Wilding Run and found Hircine, waiting for me.
He turned my love into an obsession. Twisted it to his infernal purposes. And I became his Hound."
Why?
"To capture the Green Lady, I would think. The strongest of the Bosmer, greatest hunters of Nirn! How could Hircine resist such formidable prey?
He's sought her as a trophy for generations. And I was the key."

"A harvester of souls! Hircine used her to create this prison. She crafted the perfect madness from my memories."
Why help me?
"Hircine did not abandon this prison. He gave it to Gamekeeper Ozzai, and she created an army of husks from Hircine's conquests.
She seeks to overrun the Valenwood and slaughter its people. I cannot allow that."

Any thoughts on the first barrier?

"In life, I laughed. Some say I was mischievous. An impractical present for a practical woman seemed irresistibly witty."

Approach the altar and he'll warn:

Shade of Ulthorn: "Only one of these will unbar the way. Choose carefully."

Each time you arrive at an altar, he will say:

"You remind me of my old self. Proud, full of hope."

At the second barrier:

Any thoughts on the second barrier?
"When my love left to become the Green Lady, she left something behind.
I kept it to remind myself of our time together. Of what could have been."
Shade of Ulthorn: "Choose carefully where you place your mark. Only one will open the path."

At the third barrier:

Any thoughts on the final barrier?
"In my darkest hour, I prayed to every god and creature on Nirn. I was desperate. I needed a way to change what was. Change the story of the Bosmer.
I found it here."
Shade of Ulthorn: "We're nearly there! Choose and be done with it!"

Enter the cave to face the gamekeeper and he'll say:

Shade of Ulthorn: "Ahead waits Gamekeeper Ozzai. I hope you are both strong enough to overcome this."

Once Gamekeeper Ozzai is killed he will release Captain Trelano:

Shade of Ulthorn: "Return, Captain Trelano. Return and leave your memories behind."

Once the captain is freed:

"At last! Gamekeeper Ozzai is defeated! The tortured souls, now avenged!
Long have I waited for this day!"
Where did you send the captain?
"Back to Wilding Run where he'd be safe. I couldn't stop her from capturing him, but I can undo the damage she's done.
He won't remember much. I know the horrors Gamekeeper Ozzai can wreak upon an unprotected mind. None should have to endure that agony."
Can you send me back?

"Of course! You need only ask. After all you have done, this is the least I can do."
I'm ready to go.
"You've saved countless souls. Gamekeeper Ozzai's army threatened to engulf all of the Valenwood. Its people can ill afford another threat in these troubled times.
Farewell, friend."

"I cannot leave this place. It is bound to me, and I to it.
I'll find a way to destroy it, even if it destroys me in the process."