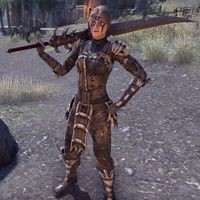 Sentry Bodfe is a Reachman guard who can be found at the entrance to Markarth, near the North Markarth Wayshrine and in the midst of Markarth's guild traders.

Sentry Bodfe: "Be off, reeker. Ard Caddach refuses to see you. Now go before I gut you."
Count Verandis Ravenwatch: "The ard needs to hear what I have to say, my friend. It is imperative that we speak."

You can speak with her before starting the quest.

"Move along, outsider, before I put a buzzard-hole in you!"

You must speak with her after addressing Count Ravenwatch.

"Didn't you hear? You and that fancy bastard aren't welcome here. Get, or I'll make a scarf out of your guts!"
The Gray Host has come to the Reach. Count Verandis wants to help stop them.
"We know all about the blood-drinkers and the beast-folk. We were dealing with them just fine before Ard Caddach called us back to Markarth.
The witch-rebels are a bigger threat. Along with outsiders who try to get into our business."
Witch-rebels?
"Some wilder witch has been stirring up the clans to the east of Markarth. Making trouble for Ard Caddach. But we'll have her head on a pike soon enough.
Look, if you want to see the ard, then bring news he doesn't know. Something about the rebels."

If you speak to her again, she says:

"Go east and sniff out the rebels, outsider. Maybe that will get you your meeting with the ard.
Now I need to return to Understone Keep and report to Ard Caddach." 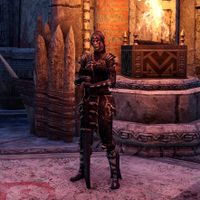 After you gather the information, you must speak with her to gain an audience with the ard.

"You again? You dare to disgrace Understone Keep with your presence, outsider? That takes guts, I'll give you that.
What's your business in the ard's keep?"
I bring information from Count Verandis concerning the witch-rebels.
"Do you, now? And you want to share that information with Ard Caddach? You're certainly full of surprises, outsider.
All right. I'll allow you to approach the throne. If your courage holds out. Fair warning—the ard's in a foul temper today."
I understand.
"Not yet, you don't. But you will. Ard Caddach's as likely to remove your head from your shoulders as listen to you, so talk fast, outsider.
And remember, the ard has no patience for fools or flatterers. Keep that in mind."

If you speak to her again, she says:

"I'm almost certain I granted you an audience with the ard. Get to it before I change my mind."

If you speak to her after your audience with the ard:

"Not many outsiders appear before Ard Caddach's throne and live to tell the tale. Since you're still alive, you must have won his favor. At least for now.
In Markarth, you're useful or you're dead. Remember that."