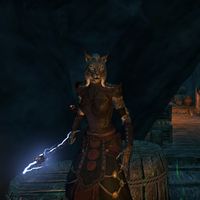 Sea Mages are a class of hostile humanoid NPCs that attack using magical abilities. They are usually equipped with a lightning staff and use water magic. The class was introduced in Summerset.

The enemy sends out a shockwave in front of them that deals shock damage.

The enemy releases raging water that surges up from the ground and rushes towards you. Deals shock damage.