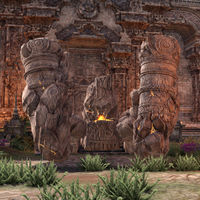 The Risen Ruins is a stone atronach created from pieces of the Moongrave Fane's foundations and animated by Nisaazda in a bid to stop you from entering the temple interior. 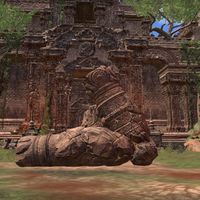 Adds will occasionally run out from the Fane of Waning Moons, including Hollowfang Bloodbrewers, Hollowfang Venom-Teeth, Hollowfang Vampires and Hollowfang Skullguards. There are two Sangiin symbols found near it, which can summon Hemo Helots by killing an enemy on top of them or performing a Sangiin Sacrifice and giving up part of one's own health.

Stonegaze
A ranged attack where the Atronach shoots a stone projectile at a player, dealing a low amount of damage.
Rockslide
The boss charges in a straight line as indicated by a red combat glow on the ground. This can be blocked on normal, but it is advised that whoever is within range simply gets out of the range of this attack instead of trying to weather the damage.
Boulder
The boss huddles, covering itself with its legs and gaining a damage shield. It throws out constant damage in the form of thrown boulders. Blocking can mitigate some of the damage from the stony shrapnel, but on Veteran, it can be difficult for your healer to heal through this for too long as a result of the incoming damage from this attack and the onslaught from the adds. One of your group members must hit it with a Hemo Helot in order to break its shield.
Big Quake
The boss suspends its legs floating into the air and uses its body to perform a jackhammer like motion on the ground, reaching far but dealing more damage to those closest
Boulder Shield
The boss becomes invulnerable and casts Boulder. It must be hit with

2 in Veteran) in order to break its shield.