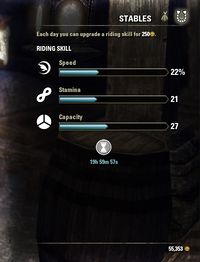 Riding Skill is the system by which you improve the abilities of your mounts. Your Riding Skill is character-bound and can only be improved once every 20 hours at a stable. There are three stats available for increase, and each can be raised to a maximum of 60:

. A single mount is needed before you can increase your Riding Skill. Riding Lessons can also be purchased from the Crown Store in order to speed up the training process. After 20 points in a single stat, a cosmetic upgrade will be applied to your mounts (a bridle for Speed, armor for Stamina, and saddlebags for Capacity). These can be turned off in your gameplay settings.

Riding Skill is not technically considered to be a skill. With Update 29, the passive War Mount in Craft now removes Stamina costs.

Before Update 6, mount stats were tied to individual mounts rather than a character's Riding Skill. Each mount would need to be "fed" daily, increasing its level up to a maximum of 50 and therefore limiting its final stats. Only five individual mounts could be owned at any one time, and only after buying all available Stable Spaces, with prices increasing from 0000001010

. You could own multiple horses of the same type if you wished. Horses could also be sold back to clear up space. By doing so, it was possible to set a character as having no active mount, which is no longer possible with the Collections system. However, switching mounts at the time required speaking to a stablemaster, which can now be done directly from the Collections screen.