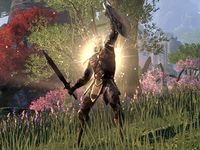 Restoring Aura increases the attribute recovery rate of the caster for as long as it is in the ability bar. When cast, applies Minor Magickasteal to all enemies around you, restoring Magicka to each ally damaging them. Radiant Aura increases the area of effect. The Repentance morph gives you the same passive abilities, but "consumes" nearby corpses for instant Health and Stamina restoration to you and nearby allies.

1.1.3
* Radiant Aura: Fixed an issue where this ability could prevent you from swapping weapon sets.
1.2.3
* Repentance: This ability's beam effect no longer plays a second time if you re-approach the corpse after going out-of-range.
1.5.8
* Repentance: Fixed a remaining issue where the effects from this ability would not clear after you resurrected.
1.6.5
* Restoring Aura now grants you the buffs Minor Fortitude, Minor Intellect, and Minor Endurance when the ability is slotted into the ability bar. When the ability is activated, it provides Major Fortitude and Major Endurance.
2.0.1
* This ability no longer removes major buffs from allies, such as Major Fortitude granted by Green Dragon Blood.
2.3.5
* Radiant Aura: This morph now grants you and your allies the Major Intellect buff upon activation, as well as having an increased radius as a morph effect.
2.7.5
* Restoring Aura: Redesigned this ability and the Radiant Aura morph so they continue to grant the Minor Recovery buffs (Minor Fortitude, Minor Endurance, and Minor Intellect) while slotted. Activating this ability also now applies Minor Magickalsteal to all enemies in a 12 meter radius around you.
3.0.5
* Repentance: This morph now restores Health and Stamina based on your character level instead of your Max Resource. It also only restores Stamina to the casting Templar, but continues to restore Health to the casting Templar and his allies.
4.2.5
* Repentance: Different Templars can now repent the same corpse.
5.0.5
* Repentance: This morph will now grey out and become unable to cast if there are no corpses around you.
5.1.5
* Fixed an issue where the Minor Endurance and Intellect from this ability and its morphs were stacking with other sources.
Retrieved from "https://en.uesp.net/w/index.php?title=Online:Restoring_Aura&oldid=2680607"