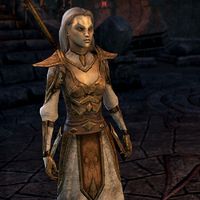 Priest Malvari is a Chimer spirit trapped inside the Judgment of Veloth, within the spirit realm of Veloth's Judgment. She is accompanied by Meram Vox and Ordinator Da'ravis. She and Da'ravis's souls are being held captive by a wraith called The Keeper.

When you arrive in the spirit realm after Vox strikes you with Veloth's Judgment, Malvari and her companions are there to greet you.

Meram Vox: "Another one. But there's something different about this one."
Priest Malvari: "You're right, Meram. This one's ... solid."
"The power in your hands is familiar, yet I cannot place it. It almost feels ....
Oh, what I would give to be able to feel anything. To feel the touch of the wind on my face, my hand on another's."
What binds you here?
"The Keeper's tricks hold me here. It's locked my soul away and it taunts me with it, holding it in its crazy game of puzzles.
It's so close, but it might as well be a million leagues away."
What puzzle?
"On the eastern dais, two keys rotate in a pattern around two locks on the flagstones.
To free my trapped spirit, both keys must be in place on both locks at the same time. Or so the Keeper says."
And you can't do that?
"I can't touch it. I can't touch anything.
But you? Can you? If you could strike the keys, slow them down so they reach the locks at the same time ... Oh, please. You must try it."

Speaking with her after freeing her soul from the Keeper's puzzle:

"You've done it! At last! The power in your hands. It's Veloth's blessing, isn't it?
I remember now. I was a priest at the shrine before the woman came. Vox. I will have my revenge!"

Freeing her soul and entering the reservoir of souls:

Priest Malvari: "So this is the Reservoir of Souls? How strange!"

Speaking to her after exiting the spirit realm:

"We have to stop Vox here and now. The power is not hers to control."

Speaking to her after Vox's defeat: