Enterprising merchants seek out and capture these delightful little creatures, calling them either "bunnies" or, if the buyer prefers accuracy or a certain level of decorum, Pale Pass Mountain Hares. So cute!

The Pale Pass Mountain Hare is an upcoming pet. Its default name is "Fuzzlekins".

The Pale Pass Pony is an upcoming pet. Its default name is "(?)".

"Less common than the usual variety, the Pale-Plume Gryphons are found only along the seacoast cliffs near the Tower of Dusk in southeast Summerset. Their Fledglings make engaging pets that can be trained to follow their masters even into danger." 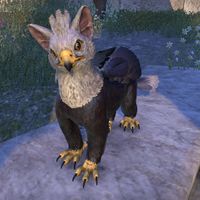 The Pale-Plume Fledgling Gryphon is a pet that was available in the Crown Store for 010001,000

from November 8th, 2018 to November 12, 2018. Its default name is "Baldy", possibly in reference to its striking resemblance to the bald eagle.

Tired of pets that follow you everywhere? Fed up with feeding them? Step up to Pebble Pal, the pet that's a … rock. 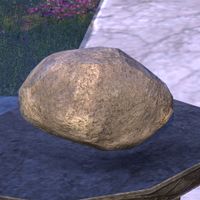 from March 21st to April 2nd, 2019. Its default name is "Rocky". Due to it being an inanimate object, it does not follow you around like normal pets; instead, it periodically appears beside you in a puff of smoke.

In their travels, the Baandari Pedlars have shown off their pack ponies to the delight of children everywhere. Recently they began selling them, and now children put even more pressure on parents to acquire them. 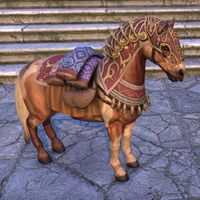 The Pedlar Pack Pony was available in the Baandari Pedlar Preview Crate that was given out as a daily reward in June of 2019. Its default name is "Trotter".

To prepare their Senche-Lion mounts, the Baandari Pedlars train them with full gear as cubs. Despite the tack, these cubs pounce and play as kittens do.

The Pedlar Pack Senche-Lion Cub was available in the Baandari Pedlar Preview Crate that was given out as a daily reward in June of 2019. Its default name is "Wrigglerump".

The Baandari Pedlars first used these repurposed mechanized spiders to help retrieve things that got lost in crevices and the like. For the right price, they may sell you one. 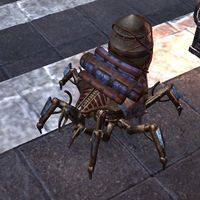 Pedlar Pack Spider was available in the Baandari Pedlar Preview Crate that was given out as a daily reward in June of 2019. Its default name is "Master Clack".

Even the pups receive the full Baandari Pedlar tack treatment! These wolf cubs are often seen chasing each other around those seeking wares from the Pedlars, sometimes tripping up customers until they're trained to know better. 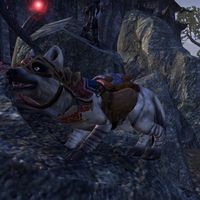 Pedlar Pack Wolf Cub is available was available in the Baandari Pedlar Preview Crate that was given out as a daily reward in June of 2019. Its default name is "Tripper".

Pining for a perfect pet? Perhaps you're a person who'd prefer a pleasantly playful piglet, pearly-white, pretty, and partial to paladins and protectors!

Pink Pearl Pigs were available to users who gifted 010001000

worth of gifts to 2 or more people during the month of February. Its default name is "Fuchsia".

Some followers of Stendarr claim that those who see a Pink Torchbug must perform great acts of charity and mercy by sunset the following day. If they please Stendarr, the pleasant little creature might follow them for a time.

The Pink Torchbug is an upcoming pet. Its default name is "Mercyseeker".

The Plum Swamp Jelly is the rarest of the so-called "Flavor" Jellies, and seeing one is considered by many Argonians to be a sign of good fortune. It's not at all unusual for an Argonian to wear a Plum Jelly's feeler as a "Good Luck Tentacle.".

Plum Swamp Jellies were available from the Crown Store for 010001,000

. Its default name is "Mulberry".

Pocket Mammoths were originally bred small in order to make them more manageable as livestock, but in Wrothgar some escaped and began breeding in the wild. However, they're easily domesticated, especially if you get one when it's young. 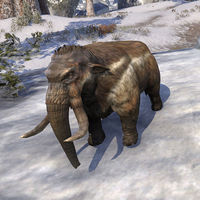 Pocket Mammoths were available from the Crown Store for 700

"I don't know, something about being followed around by a tame miniature giant elemental amphibian just seems right to me, you know? Expresses my inner newt." —Dinuviel Darkwater of Rellenthil 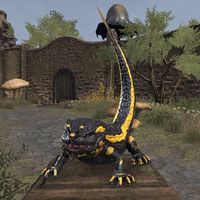 The Pocket Salamander was given to anyone who pre-ordered the Summerset chapter. It is a smaller version of the Salamander. Its default name is "Newton".

"Some keep so-called Pocket Watchers as pets, playing off the name of those Pocket Mammoths seen in Wrothgar. Even at their smaller size? Still not the wisest move. Small Daedra are still Daedra, after all, and thus beyond our ken. "—Warlock Aldaale 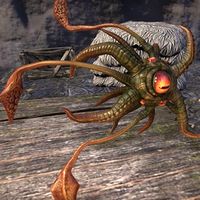 The Pocket Watcher is a small green Watcher. It was available in the Crown Store as a Crown Gem exclusive for 00300300

for ESO Plus subscribers. Its default name is "Neverdream".

A favorite household pet in Morrowind, the Pony Guar is a glutton for affection.

Pony Guar pets came with the purchase of the official guar plush toy (redeemable only on PC/Mac). Its default name is "Coconut". The item was originally called "Pet Pony Guar".

When young Argonian egg-siblings tell their creche-parents they want a pony, this is what they mean. And now that you've seen it, don't you want one, too?

The Pony-Lizard is an upcoming pet. Its default name is "Spinemane".

These perky metal creations are known to pack quite the pinch. Though their rust-resistant coatings do enable them to enter into water, they're far better at sinking than swimming. 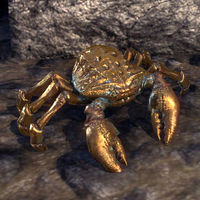 This pet is available as an Epic-level reward in Flame Atronach crates. Its default name is "Pincer". 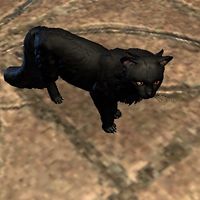 The Prong-Eared Forge Mouser is an upcoming pet. Its default name is "Earzles".

Prong-Eared Grimalkins are widely regarded as having supernatural powers thanks to their ability to appear almost instantly when a container of cat food is opened, and to fit themselves into boxes that seem entirely too small for them. 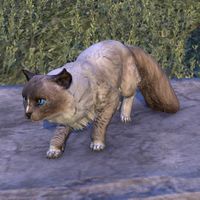 . Its default name is "Earzles".

"Cats with odd-colored eyes see into the depths of those around them. Those with white fur? They see into time itself." —Zamarak 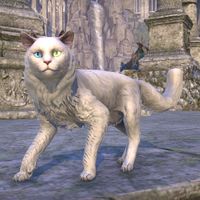 The Prong-Eared Odd-Eyed Cat is a pet available in Baandari Pedlar Crown Crates. Its left eye is blue, and its right eye is green. Its default name is "Elegante".

These rare Brassilisks are powered by blue soul gems brought back from the Psijic hideaway of Artaeum at the end of the First Era by Sotha Sil himself.

The Psijic Brassilisk is a brassilisk pet available from the Crown Store for free exclusively to PS4 players between November 7 and December 31, 2017. Its default name is "Psony". The pet's blue adornments are a reference to the PlayStation's blue color scheme and the name is a reference to the company, Sony.

Originally bred on the Isle of Artaeum, the black-and-white Domino Pig is so smart it can count to five and learn to recognize its name. 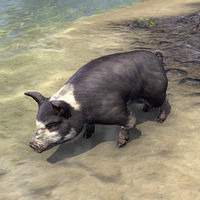 Psijic Domino Pigs are available from the Crown Store for 700

By tradition, the Psijic Mascot of the order's Ritemaster is always a Bear Cub—but since there's been only one Ritemaster, Iachesis, for over 3,000 years, the tradition hasn't had much opportunity to change. Fortunately, others can befriend them as well!

The Psijic Mascot Bear Cub was given away as a Daily Reward in November 2018. Its default name is "Bearmaster".

The first Guar came to Artaeum when a Psijic advisor to the Tribunal returned from Mournhold with a Pony Guar in the middle of the First Era, and they've been favorites of the Psijics ever since. There's even a glowing Psijic Mascot Guar!

The Psijic Mascot Guar Calf is a pet available in July 2018's Daily Rewards. Its default name is "Glowy the Guar".

This perky but enigmatic equine glows with Magicka through the mystic runes that embellish its possibly-illusory epidermis. Enchanting!

Psijic Mascot Ponies were a potential reward for the Summerfall Event. Its default name is "Glony".

"Some say that Psijic Mascot creatures aren't true animals at all, but illusory constructs created by Psijic monks as portable storage batteries of Magicka," says Sapiarch Soraturil. "What nonsense!" 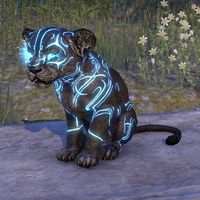 The Psijic Mascot Senche Cub a pet that was available as a daily reward for July 2020. Its default name is "Mystikitten".

Are the Psijic Mascot pets real animals with an enchanted appearance, or illusory beast companions created from Magicka? The Psijic monks know which it is, but ask one, and all you get in reply is a smile.

The Psijic Mascot Wolf Pup was given away as a Daily Reward in March 2019. Its default name is "Howland".

The glowing Purple Daggerback boar is found only in Craglorn in the vicinity of the Spellscar, from which it seems to have absorbed some sort of magical aura. 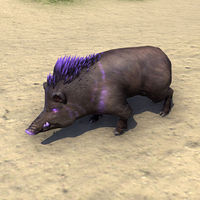 The Purple Daggerback is a pet available in the Storm Atronach Crown Crates as an Epic-level reward. Its default name is "Pricklypear".

Madness follows the Purple Torchbug, or so some claim. Others believe that those who once held Sheogorath's attention attract these insects. Either way, perhaps Sheogorath's dubious blessing touched them.

The Purple Torchbug is gifted to players who attend an official Elder Scrolls Online community event in 2020. Its default name is "Fickleflutter".