When the dro-m'Athra ride from the Dark Behind the World, they go mounted on these dread steeds: the Rahd-m'Athra! Are they spirits from the Dark Moons, or tangible creatures of evil? 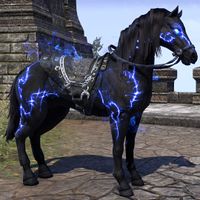 The Rahd-m'Athra could be acquired by pre-ordering Elsweyr. Its default name is "Bent Horse".

The shadowy shapes of inky goats lead revelers through the streets to Sanguine's latest celebration. Often, the animals are fitted with the symbols of the party: sweet drinks and heady rose perfumes. Take a ram like this into your care at your own peril.

The Ram of Dark Delights is an upcoming mount. Its default name is "Rosebud".

Pit Wolves are so called because they were bred by the Reachmen as fierce pit fighters, often matched against bears or bristlebacks. In order to make his guards more impressive, the Tyrant of Markarth was the first to have Red Pits trained as mounts. 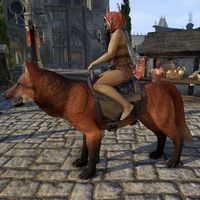 The Red Pit Wolf is available as a Legendary-level reward in Storm Atronach Crown Crates. Its default name is "Ravager".

"Camels do indeed thrive within Sovngarde. When called to join battle in Tamriel, these resplendent creatures eagerly race forward to meet their valorous riders. Do not believe the claims that they spit mead, though."—Clever Woman Moritra 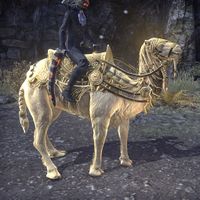 The Resplendent Sovngarde Camel is available in Sovngarde Crates as an Apex-level reward. Its default name is "Troublemaker".

None dare stare Riften's native ram in the eyes—it sees threats in many things, and only its owner can meet its gaze without needing to brace for an immediate headbutt. In short, would-be Riften Coalhorn Ram thieves are frequently airborne. 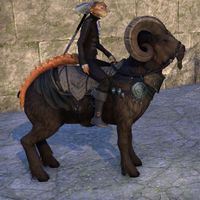 The Riften Coalhorn Ram will be available in the Crown Store for 030003,000

When Imperials of Akaviri descent settled in and around Rimmen toward the end of the Potentate, something about these local Ringtailed Wolves found favor with them, and they domesticated and bred them into distinctive mounts.

Rimmen Ringtailed Wolf is an upcoming mount. Its default name is "Longloper".