The UESPWiki – Your source for The Elder Scrolls since 1995
< Online: Creatures
Jump to: navigation, search 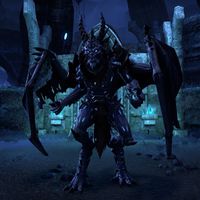 Lord Warden Dusk is a large Grievous Twilight found in the Last Cell Block of the Imperial City Prison. He serves as the dungeon's sixth and final boss.

In combat he summons small draining portals and two large floor-bound portals. Stepping on one of the floor portals will lock your character in place before teleporting you high above the fighting area, where you will likely die if you don't use the "Brace For Impact" synergy. He can also split into four Shades, which the players must defeat in order to progress the fight.

He has a chance to drop the Warden's Courage one-handed sword. On veteran difficulty, he drops a helm from the Lord Warden set. His loot is found in a chest by the exit after his defeat. 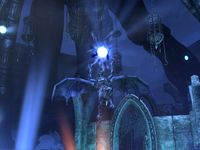 The Lord Warden flies up and channels a magical ball in his hands, shooting it down at everyone below. The only way to avoid it is to jump into the portals before he casts it, and brace for impact when dropping down from the ceiling.

Coldharbour Meteor
Lord Warden casts a meteor on one player during Shade phase. This attack must be blocked to negate the incoming damage.
Shadow Orb
Floating orbs that tether and suck health from those who stand too close to them. This can be avoiding by keeping a distance from the orbs.
Shadow Bolt
A meteor falls from the ceiling onto one player, crushing them with magic damage. This ability stuns whoever it hits. This ability can be dodged or blocked. Blocking is easier if you can't react within one second.
Shadow Barrage
Dusk attacks one person by rapidly shooting purple bolts at them. The tank can get in front of the target and absorb the damage. Alternatively, the healer should go nuts to keep the target alive. However, the former is the more viable option.
Ceiling Portals
Lord Warden summons portals that move on the ground. Entering one will cause you to fall through and drop down from the ceiling. You can survive the damage by using the synergy to Brace for Impact.
Portal Feedback
If you fall into a portal after falling from another portal, you will take immense damage.
Teleport Strike
Lord Warden teleports behind whoever has aggro and deals moderate physical damage.

Lord Warden Dusk can be overheard speaking to his underlings as well as directly taunting you as you progress through the Imperial Prison.

Summoning the Harvester to aid the Overfiend: 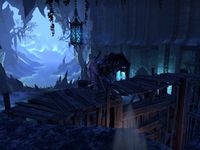 The Lord Warden watches over the Abomination

Lord Warden Dusk: "Did Lyranth think killing the Flesh Sculptor would disarm me? His creations live on!"

While fighting the Flesh Abomination:

If the group wipes on the Abomination:

Lord Warden Dusk: "Mortal flesh has so many uses. Yours will not go to waste."

While approaching the Lord Warden:

Lord Warden Dusk: "Lord Bal frowns upon battle amongst his servants. But Lyranth is cunning to have a mortal of your strength fight for her."
"I had a champion like you once, who helped me rip the living essence out of her clan members. Daedric animus make great weapons and armor, you see. Dear Lyranth bears a grudge."
Lord Warden Dusk: "Come, meet Lyranth's clan for yourself! They fit quite comfortably!"

As you fight the Lord Warden, he will taunt you.

When he splits into shades:

Lord Warden Dusk: "You fools are beneath me! My shadows will contend with you. What did Lyranth promise you? Why aid that wretch? There are no spoils here but death! Her clan deserved their fate; their souls will serve me unendingly."

Lord Warden Dusk: "Impressive, for insects! All you've done is delay the inevitable!"

If your group is defeated during the battle:

"With your death will come many others."
"More bodies for the prison. Our occupancy is inexhaustible."
"We will harvest what's left of you, and your corpse will serve Lord Bal."
"Your bodies will aid us in the destruction of your kind."
"Do not fear. Even in death, your organs will serve us."
"" 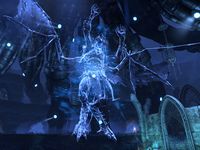 After defeating the Lord Warden, his soul will emerge from his corpse:

Soul of Dusk: "No! I will not suffer this!"
Lyranth: "My clan suffered it. And now, you will."

Following this, he is bound to the Grievous Leeching Ward, a Xivkyn-style shield Lyranth gives you as a reward for the quest. His animus will speak to you from it as the Soul of Dusk.