In the language of the Ayleids, the name of this ruin translates as "Soapstone Delve," but the locals around Chorrol know it as the Elf Haunts, and keep away from it. 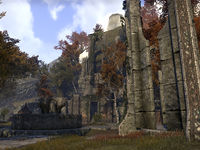 Lipsand Tarn is an Ayleid ruin in northwestern Cyrodiil, north of Fort Rayles containing vampires. The ruin consists of a few chambers. The entrance hall is on the upper floor, and leads to a main chamber with stairs that lead downward. Varius and Laudine can be found inside the ruins. Their bodies must be burned so they don't transform into vampires.

Marbita stands before an altar downstairs in the western chamber, which can be accessed by going down the stairs from the main hall, turning right at the stairs' landing, and making another right to enter the hallway heading west. Several bookshelves can be found against the walls in every room. Two water sacks can be found in the main chamber.

The exterior of the ruin consists of camps, featuring brown tents for the vampires to take shelter in. A chest can be found outside of Lipsand Tarn, down the cliff and to the south. 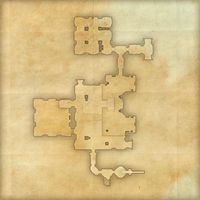 A map of Lipsand Tarn