The Level Up Advisor is a mechanic introduced into Elder Scrolls Online in Update 17, with the intent of helping new characters to progress as they level. It provides recommendations on where to allocate skill points for specific builds and playstyles, and gives rewards upon levelling up and upon reaching significant milestones. 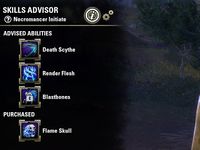 Level Up Advisor for a Necromancer

When you look at your Skill screen, you will see a new window on the left. You can click the gear icon in the corner to choose which build you'd like, or to turn off the skill advisor.

The rest of the window is divided into two sections. At the top are up to 3 skills or morphs that are recommended for your choice of build. If you meet the requirements for these skills and have available skill points, you can click on them to invest a skill point in them. If you do not meet the requirements (e.g. your level in the skill line is too low or you have not advanced the skill enough to unlock the morph), the icon will be grayed out and there will be a lock symbol on it. These locked skills will move to the top of the list. If all three of the recommended skills become locked, you will not be able to use the skill advisor until you have unlocked and invested points in those skills.

Below this section, there is a list of skills applicable to this Build which you have already spent points on. You may also see, both here and in the regular skill selection screen, an icon which looks like a ! in a triangle. This is used to indicate ill-advised morphs, which may be sub-optimal for your choice of build.

Note that the skills advisor does not give you all of the skills needed for each build. For example, it may suggest that the first skill you should select on a given skill line is one of the skills lower down on the list, which you cannot unlock without building up that skill line first, for which you will need to invest points in earlier skills that are not considered part of your build.

This list shows the various builds the Level Up Advisor will help you with. For each class, there is a Starter build, two Damage builds (one Magicka and one Stamina), one Tank and one Healer. You can always change your build at any time, and the tool will give you advice on which skills and morphs will best fit the build you've chosen. For an established character, you might want to see which build best fits what you currently have set up. Then the advisor can offer you tips to further optimize your character. 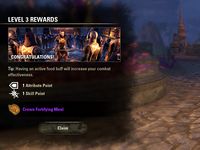 When you look at your Character screen (provided you are below level 50), you will see a window on the left, showing you what rewards you will earn both on your next level up, and your next milestone, which occurs every 5 levels. (If you are 1 below a milestone level, you will only see that level). When you level up, you will see this screen again, where you can claim your rewards, including making a choice if there are multiple possible rewards. Most of these rewards are Character Bound, meaning they cannot be given to other characters, even on the same account, so you should either use them or destroy them, as they cannot be traded or sold.

†Style materials will be for your race's style.
‡This will be a Flame Atronach Crown Crate until further notice. Note that these are one-time only rewards - only your first character to reach levels 20, 30, and 50 will receive a Crown Crate.
¹These rings will be level 5 no matter when you open the container, so there's no benefit to holding onto them for later.
²This reward is only given if you have not purchased any upgrades from Pack Merchants. If you have, you will instead just be given a tip to seek them out for more upgrades.
³Since these items are Collectibles, you can only earn them once each, and only if you have not previously acquired them via other means. However, in cases where there is more than one choice available, you can earn them all by using multiple characters.
⁴The bank space upgrade evidently only appears for players who have not already purchased any bank space upgrades on any of their characters.
⁵This reward is only given to your first character to reach level 40, subsequent characters will still receive a prompt to go to an outfit station but no token will be awarded.
Retrieved from "https://en.uesp.net/w/index.php?title=Online:Level_Up_Advisor&oldid=2541468"