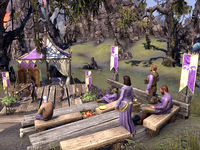 For background information on the festival, see the lore page.

For completing a festival daily quest, you will receive one Jester's Festival Box. Each Gift Box contains a selection of items related to the Jester's Festival. This includes unique recipes, furnishings, or collectibles. All of these items can be traded with other players. Rewards vary slightly each year as detailed below.

Jester's Festival Boxes can be obtained as a quest reward from one of the jester leaders at the Jester's Festival tent. Each quest can be completed once a day, granting a maximum of 6 boxes per day, per character:

Completing all three Jester given activities unlocks the Lord of Misrule / Lady of Misrule achievement. In addition, activating Pie of Misrule memento will net you double XP for two hours.

The 2022 Jester's Festival ran from March 31 to April 7, 2022. It introduced a new event quest, Getting the Band Together. It also added the new Cadwell's Surprise Box. memento (obtained by combining five Revelry Shard fragments) and Second Seed style pages. The third and final fragment for the Scales of Akatosh skin was made available from the Impresario for the first time during this event.

"Publicize the pointless and the preposterous with a pretend party sure to perplex the pretentious and the pessimistic but please your puerile peers who profess a passion for playfulness and princely porcine prizes."

The 2021 Jester's Festival ran from March 25 to April 1, 2021. An important change from last year is the introduction of three new daily quests for the event which are as follows:

The first daily event quest you completed rewarded you the Stupendous Jester's Festival Box and ordinary reward boxes for the following quests. Along with the rewards from the previous years, this year introduced Regal Regalia Outfit Style Pages and fragments for the Playful Prankster's Surprise Box memento. You could receive 00000033

for the first daily event quest you completed per day. The Impresario introduced the third Deadlands Scorcher Skin fragment—the Rune-Scribed Daedra Veil—during this event. This was the only time you could get it as the next event introduced a new set of fragments. The Impresario's other wares included bound Regal Regalia style pages and fragments for the Sovereign Sow.

During the Jester's Festival, the Crown Store introduced the Regal Regalia weapons set, the Day of Release Roisterer costume and the Regal Razorback pet.

Returning were the following items:

Some animals are more equal than others

The 2020 festival is the first chance to purchase the Spectral Berries of Ripeness, which can be used to transform a nascent Indrik into its Spectral form, as well as the accompanying Haunting Indrik non-combat pet. Players can receive three Event Tickets each day for the first event quest completed, with a total of 24 possible tickets by the end of the event.

The possible drops within Jester's Festival Stupendous Boxes include:

"Celebrate the absurd during the next Jester’s Festival event and reap ridiculous rewards, including new collectibles, bonus XP, and more! Find out everything you need to know right here. There’s pie!"

The Jester's Festival 2019 ran from March 21 to April 2, 2019. The festival included the addition of a new "Stupendous" rewards box that could contain two new Mementos or the new Cadwell's Kitchen Style motif. The 2019 festival was also the first chance for players to buy the Dawnwood Berries of Ripeness from The Impresario, used to mutate the Nascent Indrik. Cadwell's Kitchen Style weapon pages could be purchased from The Impresario for 5 event tickets each. In addition, the new Springtide Indrik, the first Indrik noncombat pet, is available from the Impresario's shop for ten event tickets. Players could receive two Event Tickets for the first event quest completed each day, with a total of 24 possible tickets by the end of the event.

Another new addition was the Jester's Festival Revelry Pie. Jester's Festival Pies are items that stack in your inventory, and can be added to your quickbar so you can throw them at players and NPCs alike. Unlike mudballs, you do not incur a bounty for throwing pies at guards. You do, however, incur a small bounty for throwing pies at the alliance leaders. There was also five new achievements associated to throwing pies, which each gave their own special rewards.

Stupendous Jester's Festival Box are a new addition to the 2019 festival. They are rewarded for the first completion of each quest in Vulkhel Guard, Ebonheart and Daggerfall each day. That's three Jester's Festival Stupendous Boxes, which have a chance to give you the new rewards. These new boxes have a chance to drop consumable outfit style pages for weapons from the Cadwell's Kitchen Style.

The possible drops within Jester's Festival Stupendous Boxes include:

The drops from Jester's Festival Box in the 2019 event were identical to the 2018 event drops, but with the addition of the following:

The Madcap Jester Monkey pet and the Jester personality were available during the event, in addition to new items such as the Pebble Pal, Cadwell's Kitchen Style pack, and a selection of novelty stick mounts.

"Revel in a prank-filled celebration of the absurd and the foolish during the Jester's Festival event. Check out this article for everything you need to know in order to participate in the peculiar and preposterous fun!"

The Jester's Festival 2018 ran from March 29 to April 2, 2018 . It was largely the same as the previous year, but with the addition of a few new rewards available from event boxes.

The drops from Jester's Festival Box in the 2018 event were identical to the 2017 event drops, but with the addition of a new runebox, furniture items, and Jester-themed consumables:

During the event, you could acquire Jester's Large and Small trees from the Achievement Vendor, Heralda Garscroft, found in Alliance capitals. Also, throughout the duration of the event, the Crown Store featured some Jester's Festival-themed items, including:

"Once a year, troupes of jesters and fools gather and encourage the people of Tamriel to toss aside their notions of status, honor, and class in a celebration of absurdity. Performers roam the streets mocking the rich and famous, towns celebrate with a variety of traditional festive pranks, and guests are encouraged to participate in silly games to win joke prizes."

The inaugural Jester's Festival ran from March 23 to April 4, 2017. It introduced the primary three event quests, the Pie of Misrule Memento, and Jester's Festival Boxes, which could yield rewards such as the Crown of Misrule Hat, many new consumables, the Cherry Blossom Branch Memento, and several recipes. Players were also able to gain two new titles, Lord/Lady of Misrule and Royal Jester. Activating the Pie of Misrule memento granted a 100% XP boost for two hours, which could be refreshed an unlimited number of times during the event.

The possible drops within Jester's Festival Boxes include:

Also, throughout the duration of the event, the Crown Store featured some Jester's Festival-themed items, including:

As part of the "Pay to Lose" category, the following wearable items were also added to the Crown Store during the event: