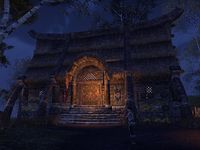 This Guild Hall is a guildhall which houses both the Fighters Guild and the Mages Guild branches in Shor's Stone. It is a small Nord-style log cabin located in the southwestern part of the settlement. There is a cooking fire in the guildhall, right across from the entrance. Two booskshelves can be found on the Mages Guild half. Three desks, as well as leveled pieces of weaponry and armor scattered around the hall, are owned. There is an advanced safebox near the magus. 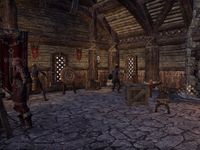 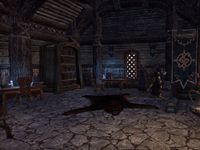