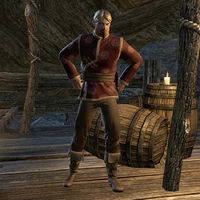 Geon Alinie is a Breton student and writer who can be found within Trader's Cove, the Sewer Tenement or Smuggler's Den. He is a possible sacrament target, and can appear as a secondary or primary target. Geon is a long-time enemy of the Brotherhood, as he is a chronicler who has been following their exploits. The Speaker wants him dead so he doesn't expose anything. 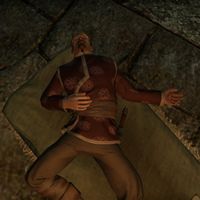 Geon as a secondary target

Geon can be found lying on a bedroll in the sewer's north main chamber, behind a wooden post near the eastern stairwell.

There is one Achievement associated with this person: