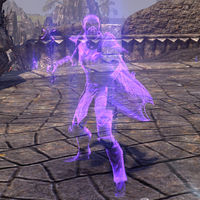 General Radrathren is the spirit of an ancient Chimer general found in the Starved Plain just outside of Davon's Watch. According to the brothers Furon and Giron Rii, Radrathren and his army are "from the time before Red Mountain" and their spirits might have been disturbed anew due to the presence of the invading Daggerfall Covenant army.

During the related quest, Sergeant Rhorlak asks you to deal with the threat of Chimer spirits. You can do so by either following the Rii brothers' advice and muster the spirits to help the Pact against the invading Covenant, or Reesa's advice to put the spirits to rest.

When you defeat spirits and dig up burial mounds:

When he is summoned and enters combat:

General Radrathren: "Fool! You don't have the power to compel me."