This quarry on the southern slopes of Red Mountain is the source of the granite being used to construct Vivec City—or it was, until the volcano awoke and began once more pouring lava down its foyadas. 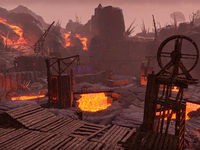 Foyada Quarry is a deserted granite quarry overflowing with lava. It serves as a battleground and is located in Vvardenfell, southwest of Sulipund Grange. The Daedric ruin of Ashunartes lies southeast of the quarry. The 36 Lessons: Sermon 23 is sitting south of the entrance, atop a pile of boards by the quarry's foreman, Mevel. Gordol Teddalennu and his guar, Hyacinth, approach the quarry from the eastern road.

One House Guard stands by the dock, another patrols the up and down the field between the quarry and the Daedric ruin, and two are posted in front of the gate leading into the quarry proper. The quarry is populated by gladiators, workers, and three Pack Guar. The Elite Gear Vendor, Keshlar, has set up shop in front of the quarry.