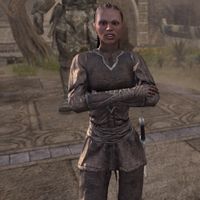 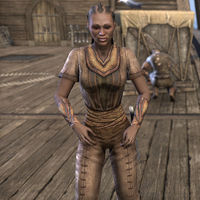 Ellashana is a Redguard alchemist who served Headman Bhosek and was tasked with overseeing Neramo's expedition in Bthzark. After the events of Bthzark she joins The Spearhead's crew on their adventures. After the events of Carzog's Demise, depending on your choice, she thinks she will accept Lambur's offer to join her crew. 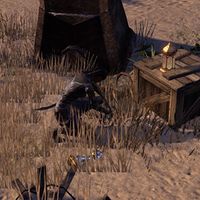 You can pick up the quest from her while she's rummaging through a crate south of Neramo's camp. She will say "How much longer? This is a fool's errand."

Before he start of this quest, you can find Ellashana just south of Neramo's camp. She is one of the persons from whom you can accept this quest by speaking with them:

"These ruins don't interest me, but the pay does.
I'm not even sure what I'm supposed to be searching for. I just try to look busy."
What are you doing out here?
"Headman Bhosek ordered me to help some crazy mage pilfer these ruins. Said to do whatever he asked, so here I am.
With any luck, the damned Elf will give up on getting inside. I need a drink."
Maybe I could help.
"Anything that gets me out of here, I'm all for it.
Neramo's up near the entrance to the ruins. See if you can speed things along."
I'll find Neramo.
"Look for Neramo to the north. Just follow the road and look for his tent."

After your business on Stros M'Kai is completed, Ellashana can be found aboard the Spearhead where she is hoping to join the crew.

"To be on the seas once again. This is paradise.
Headman Bhosek is a cruel master. If Kaleen will have me, I will join the Spearhead's crew."

"Foul cultists, defiling the souls of the dead. I hope we find more of them so I can cut down a few myself."

Her dialogue in Daggerfall is the same regardless of whether or not you chose to destroy the relic. Either way, she will be upset with Kaleen for being in favor of keeping it and partial to leaving her crew so that she can sail with Lambur instead.

"I was so certain I wanted to sail with Captain Kaleen. But I still can't believe she was in favor of keeping that awful relic.
I think I might take Lambur's offer and join her crew."

"I had not expected to see you again! I'm glad you're still alive.
It was a hard choice, staying with Kaleen or Lambur. Ultimately, I'm doing more serving Fahara'jad than I would as a sword for hire."

She can be found with other mourners of Duchess Lakana near the palace.

"She's gone. Lakana. She was the bravest of us. She was our hope.
I've heard only rumors surrounding her demise. I don't know who cut her down. But mark me, friend … if I find him, he'll suffer a lengthy death."

This Elder Scrolls Online-related article is a stub. You can help by expanding it.
Retrieved from "https://en.uesp.net/w/index.php?title=Online:Ellashana&oldid=2491868"
Last edited on 18 September 2021, at 05:42