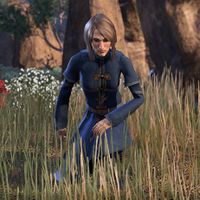 Elianna Pevengius is an Imperial who was recently robbed by a gang of Ruddy Fangs who are camped at the Sleeping Badger. She had journeyed to Rimmen from Cyrodiil to bring her husband's remains back home.

Her husband, an Imperial Legionnaire, came to Elsweyr as part of Euraxia Tharn's invasion force. After being killed in action, Tharn refused to have the remains of the fallen returned to Cyrodiil. Elianna managed to retrieve her husband's remains and personal possessions when she was waylaid by the bandits. She could use your hellp.

Elianna will be crouching near a tree and will ask you to get down as you approach.

"Stay low in the grass. We've got Ruddy Fangs up on the hillside, and probably more down on the other side of the cliff."
What's a Ruddy Fang?
"The Ruddy Fangs are the biggest bandit pride this side of the Scar. And probably south of the Scar too. This bunch has been preying on refugees fleeing the Dragons. As if they haven't lost enough.
Shook me down too, bastards."
Is that why you're hiding here?
"I'm not hiding, I'm waiting. Thought I might sneak into camp at an opportune moment and get back what's mine, but I've been out here for nearly a day now.
I should probably just get back to Riverhold before I pass out."
I can get your things back. What am I looking for?
"You'd do that? It's a backpack, Imperial legion make. It was my husband's. It's just some personal items. Things he had before … before there were damn Dragons!
Sorry. I'm tired and hungry. I should go. Find me at the inn in Riverhold. And thanks."

You can then ask her some further questions.

"North of here. Toward Cyrodiil. It's a trade town close to the border. Pretty quiet. Or it was. I'm not sure anywhere is quiet anymore."

No valuables?/Did you have any valuables stolen?

"A handful of gold. I don't care about that. I just want my husband's things. The Dragons already took his life, I'll be damned if these thieving scum take his memory."

What were you doing out here by yourself?
"Finally bringing my husband home. As much of him as there was. I had to travel all the way to Rimmen. That Tharn witch wouldn't even return his remains to the legion.
Queen. She's a traitor."

Why did she have your husband's remains?
"She brought him to Elsweyr. Led an army here to restore order for the Empire. She just wanted a kingdom of her own.
He died protecting people who'd spit on his grave because of her, if he had one. I'll never forgive Euraxia Tharn for that."

Once you have found her husband's backpack, you can find her waiting in the Banished Regrets Inn.

"Hey, you came! Did the Ruddy Fangs still have my things?"
I was able to recover what they took from you.
"This means a lot. Really. I don't have much left to remember him by. The things in this pack, and the condolences of the legion paymaster every month when I collect his due.
Take the gold. I don't need it. You've more than earned it."

After she gives you some gold, you can ask Elianna what she will do next.

"I didn't really expect anyone to help a legion widow out here. The Khajiit don't have much love for the Empire these days; besides, they've got enough of their own problems.
Dragons and usurpers and undead. This whole world's coming apart."
What will you do now?
"I'm going to make a small memorial shrine over my hearth. If I still have a hearth. I won't know until there's a break in the fighting long enough that I can get home. I barely avoided a battle between the Dominion and the Covenant on the way here."
Better luck the rest of the way.