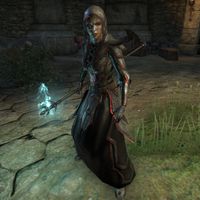 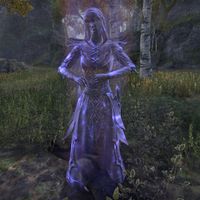 Doshia is a Dremora minion of Molag Bal. You fight her while trying to rescue Merric. She transforms into a Harvester halfway through the fight.

Initially, only a projection of hers can be seen. She first appears after Aelif and Merric defeat some cultists.

Doshia: "Cease your meddling, scum! The Redguard's soul will fuel the Mortuum Vivicus. Nothing you can do can stop it!" 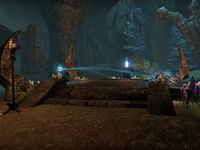 You inform the Guildmaster, who then sends you back to the fighters. Aelif is fighting off Daedra. Doshia will not enter the fight, but will taunt her:

Aelif: "Welcome to the fight, comrade. Claws out, and watch yourself!"
Doshia: "Fools! You cannot stand against the might of Molag Bal!"

Aelif: "More coming. Brace yourself!"
Doshia: "Cease your meddling, mortal. The Master has plans for the Redguard."

Aelif: "What was that voice?"
Doshia: "Quite the little fighter. We're not done with you yet!"

Doshia: "Hah! You're too late! I've found him. The Redguard is mine!"

To this, Aelif will react:

Aelif: "Merric ran off after some other Daedra. Get after him! Don't let her take him!" 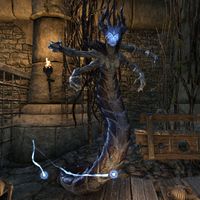 Doshia transforms into a harvester

Look for Merric. You will hear his voice.

Merric at-Aswala: "I think that's the last of them."

A projection of Doshia will appear and say:

Doshia: "My master has plans for your pure soul, Merric. You should feel honored."

The projection and Merric both disappear. Look for Merric in Buraniim and you will find him there imprisoned by Doshia. Attack her and she will say:

Doshia: "You're too late, mortal! His soul will fuel the Mortuum Vivicus!"

As she loses health, she transforms into a Harvester. This grants her access to standard Harvester skills, including the ability to summon Feast orbs which will heal her if they aren't destroyed. Upon her transformation, she will say:

Doshia: "I will consume you as well!"