Scholars who study the long-lost Dwarven race love to speculate on the original purposes of abandoned Dwemer sites. None of them have any credible ideas as to the function of the mysterious Deeping Drome. 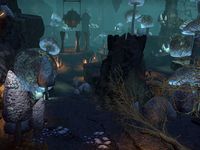 The Deeping Drome is a subterranean Dwemer ruin-turned battleground. It is made up of large fungi-covered cavern formations that surround a large metallic sphere in the center, with slopes near the team spawn points and small skeleton-filled tunnels beneath the platform in the middle.

Together with Mor Khazgur, it was released for Morrowind owners in Update 17. The Dragon Bones and Update 17 preview describes it as "In this long-forgotten Dwarven ruin, you'll carefully navigate claustrophobic pathways filled with the bones of would-be champions. This new arena is built for deadly ambushes and stealthy playstyles, so watch your back!"[1]

This Elder Scrolls Online-related article is a stub. You can help by expanding it.
Retrieved from "https://en.uesp.net/w/index.php?title=Online:Deeping_Drome&oldid=2139333"
Last edited on 21 April 2020, at 02:45