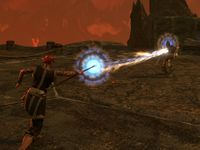 Force Shock deals elemental damage from all three elements, and has a chance to apply an elemental status effect. The Crushing Shock morph interrupts enemies who are casting a spell, putting them off-balance, while Force Pulse increases the damage and also damages up to two nearby enemies if they are currently afflicted with the Burning, Chilled, or Concussed status effects.