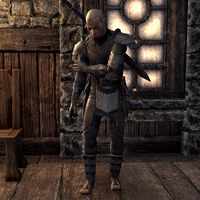 Captain Jerick is a Breton member of the Lion Guard who was kidnapped by the Supernal Dreamers and brought to their camp located near Koeglin Village.

When he is found at their camp, he will magically bound and unconscious, the centerpiece of a ritual. Once you have fought off the Dremora you can attempt to wake him.

Once awake, he will be confused but still able to move.

Captain Jerick: "What happened? I have to get to Koeglin Village. Meet me there!"

You can then head back to the main road and follow it to the nearby village, Captain Jerick will be waiting for you in the Sleepy Sailor Inn.

"Gods! They killed them all! Those Daedric filth killed my entire patrol. Then they dragged me off and threw me into a nightmare.
'Vaermina.' They kept saying 'Vaermina.'"
At least now you're free. What will you do now?
"High King Emeric needs to know about this cult. With their nightmare magic, these Daedric madmen could plunge Stormhaven into chaos.
But you … thank you for saving me."

After his rescue, you can ask him about what he knows about the Supernal Dreamer cult.

"As soon I recover, I'm going to Wayrest. I have to warn the king about these people, these Supernal Dreamers."

What can you tell me about the Supernal Dreamers' plans?
"I don't know, but it can't be good. They're up there calling on Vaermina, the Daedric Prince of Nightmares … putting me to sleep and talking about summoning … something.
If it's what I saw in my dreams, it's something terrible."

You think they're planning something here in Stormhaven?
"Without a doubt. I even heard King Emeric's name…. we need to warn him. We need to warn everyone.
I told the village constable, but he's more worried about these slavers. He doesn't understand. These people worship Vaermina."

What do you know about Vaermina?
"No more than most men. She's the Daedric Prince of nightmares and evil dreams.
She's … horrible, but some people actually worship her."