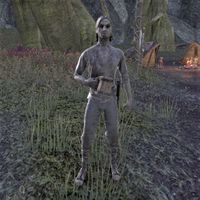 Boril Drelas is a Dunmer who runs a kwama mine Deepcrag Den. He is the husband of Edrasa. When the kwama went berserk, Boril charged back into the mine to save the surviving workers. Edrasa will send you to find him during the related quest.

When you first approach him in the mine, he will mutter:

"In all my years, I've never seen anything like this."

Informing Boril of his wife's concern for him will cause him to describe his predicament,

Your wife is worried about you, Boril.
"I came back to look for my wife's cousin Renvis and the rest of our missing workers, but I haven't had much luck. I've been stumbling around in the dark, trying to avoid getting eaten by kwama. But I did discover something quite disturbing."
What did you find?
"Treachery! The mine is filled with open vials spewing noxious fumes. This was no accident. I sealed several of the vials and cleared this chamber, but I can't get down to the lower levels without getting swarmed by kwama."

Like his wife, he will not hesitate to accept your assistance,

Maybe I can seal the rest of the vials.
"If you do, you'll be the hero of Deepcrag! If you run into any miners, give them one of Edrasa's potions. And keep an eye out for Cousin Renvis. He's not the sharpest arrow in the quiver."
I'll do what I can.
"I've never heard of anything like this happening in a kwama mine before."

After you have saved Renvis and uncovered the identity of the perpetrator, you will be given a choice: you may either provide Boril with the necklace that Renvis gave you, which will act as substantial evidence against Edrasa, or you may choose to show mercy towards Edrasa and give her the pendant, thus absolving her.

If you speak to him before speaking to Edrasa, he'll only say, "Sick workers, poison fumes, enraged kwama … could anything else go wrong?"

If you decide to tell him about Edrasa's betrayal, you can tell him:

Renvis released the fumes, but someone put him up to it. He had this amulet.
"Let me see that!
This is my wife's amulet. She told Renvis to poison the mine? Why would she do such a thing?"
To shut the mine down so she could spend time with you.
"Foolish, selfish woman! Workers were hurt. Livestock was killed.
I won't tell the others what she did, but I don't know if I'll ever be able to trust her again."
I'm sorry this happened.
"I can't believe she was so selfish and thoughtless. Maybe I'll send her to my mother's netch farm in Stonefalls. She'll hate that even more than Deepcrag."

Shortly, Edrasa will approach and beg for forgiveness:

Edrasa Drelas : "Please forgive me! I'll never do such a foolish thing again!"
Boril Drelas : "Foolish, selfish woman! I'm sending you to my mother's netch farm in Stonefalls."
Edrasa Drelas : "Not your mother's! Not netches! Anything but that, dear husband."
Edrasa Drelas : "Netches are worse than kwama! Oh, what have I done?"
Edrasa will run off into the distance and fades away.

After the quest, he'll say:

"I still can't believe what Edrasa did. Foolish, thoughtless woman.
I'll send her away as soon as things settle down. I don't want anyone to learn what she did, but I need time to get over this."

If you lie about the evidence, he will believe you easily,

"How strange that someone would do something that senseless. Thanks for your help, friend. The mine will be working again shortly. We'll keep any eye out for trouble in the future."

With this, he will hand you a pair of Kwama Mining Gloves and some gold.

Edrasa will then approach him to ask what more she can do:

Edrasa Drelas : "Husband, you work too hard. Let me help."
Boril Drelas : "Don't worry, dear. The potion you concocted has been a great help today."
Edrasa Drelas : "I'll help all I can. I'll gather more plants in case I need to make more potions."

After the quest, if you didn't snitch:

"I wish I knew why someone would be so malicious. I'll continue investigating.
The kwama should return to normal in a few days, thanks to you."