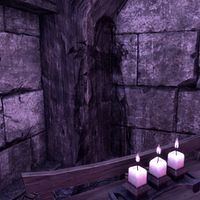 Boethiah is the daedric prince of deceit, conspiracy, and secret plots of murder. She has played a part in forming the Maulborn, as Meram Vox died in an attempt to bring her the Judgement of Saint Veloth. The Shadow of Boethiah is an avatar of Boethiah that appeared to Uviril Vox. In Abamath, she speaks through an Animus Geode to help you keep Mauloch from entering Tamriel.

There is evidence to suggest that she also manifests herself at various places in Tamriel as Aspera, including Aspera the Forgotten in Eidolon's Hollow, Aspera Giant-Friend at Cradlecrush, and Aspera Arena-Friend in the Dragonstar Arena, a contest held by Boethiah herself. Boethiah also shares the same voice actor with her.

When speaking to Urili Vox:

Urili Vox: "False gods. False justice. Meram was right. The Daedric Princes must return. And blood must flow!"
Urili Vox: "Let them die. Let them rot. Let them feel my pain. No false gods can stop me!"
Shadow of Boethiah: "Yes, Urili, yes. Let your plague spread across the land as your rage fills you and makes you strong. But you need Veloth's hammer. You must take it for your own."
Urili Vox: "The Judgement? That's what my son sought to possess. Yes! It will be mine! And with Judgement in my hand, the Tribunal shall fall!"
Shadow of Boethiah: "Go. Gather your followers. Spread your plague. Wield the hammer. With it, you can devour living souls and unleash your true power!"
Urili Vox: "Heh heh. You think to hide from me, intruder?"
Urili Vox: "I. See. You. Heh. Heh heh." 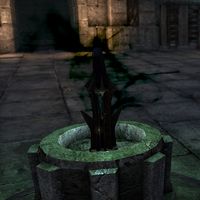 "Greetings, mortal."
What are you?
"I speak through this object, not from it, mortal.
That troll-herder Mauloch must not invade this realm. The pathetic worms in the cave beyond must be destroyed. You must stop their foolish rituals."
I intend to, but the way is blocked by a barrier.
"This object is called an Animus Geode. The Cult imbued it with a curse. When attuned to a door, it can only be destroyed by the release of a soul.
Feed the Animus Geode a soul and it will shatter, clearing your path. Arithiel's soul will do nicely."
Why Arithiel? What has she done?
"She betrayed her people and joined the Worm Cult. Only after she was forced to murder her own family did she question her choice.
Her word is worthless, but her soul... feed it to this gem, and rid yourself of the traitor."
I don't want to kill her.
"This is not about what you want, but what I need. This stone drinks souls, and its thirst is strong.
Take the geode in your hand. Sacrifice her soul to clear your path."
Who, or what, are you?/Who are you to ask me to kill her?
"Many mortals call me Boethiah.
Sate the geode's thirst with Arithiel's soul, and I will grant you a boon, for a time, to aid in your battle with the Worm Cult."
What must I do?
"Use the Animus Geode to absorb her soul and it will dispel the barrier. The Worm Cult is of no interest to me for the moment, but Mauloch cannot be allowed to invade Nirn.
We have history, Mauloch and I. It would amuse me to see his plan destroyed."

Boethiah's disembodied voice starts to speak to you within the Dragonstar Arena, starting in Round 6: The Grove:

Boethiah: "Now the real challenge begins, my honored contestants. My champion has been silenced so that I may congratulate you personally for making it this far. From this point on, you will be pushed to your limits."
Boethiah: "You compete to earn the honor of becoming my champions! The next challenges will test you in ways you have never imagined."
Boethiah: "Prove your worth. Continue to impress me. Then, perhaps, I shall allow you to silence that fool of a champion who loves the sound of his own voice—permanently!"
Hiath the Battlemaster: "I'd be insulted, but I do love the sound of my own voice. Before you can face me, however, more arenas await you. These tiny Wood Elves, for example. They formed the nicest partnership with … what are those things called? Ah, yes. Werewolves!"

Beginning of Round 8: The Steamworks:

Boethiah: "Your strength knows no bounds. Rarely have I seen a group that works so well together. The last time must have been, oh, those poor Mages Guild members I found in the Dwemer ruins years ago."
Boethiah: "How sad that they would fall to the traps the Dwemer left behind. Now they are merely thralls who fight alongside the machinations that they once researched."
Boethiah: "Let my old toys face off against what may be my newest champions. Show me your true strength!"
Hiath the Battlemaster: "There's no way this group will get past your defenders, master. But please, let them try. I love a good slaughter!"
Boethiah: "Hiath, these champions appear to be up for the challenge of facing you. Maybe your time has finally come to an end. But there is still another arena to survive before you go up against my champion."

Entering the Round 9: Crypts of the Lost:

Boethiah: "You have done it. You have proven your worth and earned this precious gift. The chance to enter my final arena and face my finest champion."
Boethiah: "And so the final challenge begins. Those who would represent me as champion now stand in this arena, deep within my realm. Only those who remain standing will receive my highest honor."
Boethiah: "You know Hiath, so his presence here should come as no surprise. Defeat him and become my new chosen. Lose, and you will be lost and forgotten in the depths of my realm."
Hiath the Battlemaster: "Oh, this is going to be so much fun."

When Hiath is defeated in Round 10: The Champion's Arena:

Hiath the Battlemaster: "You beat me? How could this happen?"
Boethiah: "And so that which could not be broken finally shatters. You shall be my newest champions, for you have earned that right."
Boethiah: "Step into the light that shines at the base of my statue so that I can present you with your rewards."
Boethiah: "I have had to suffer with that fool of a champion for so long, I despaired ever being able to replace him. But you honor me with your skills and shall ascend to become so much more."
Boethiah: "Rise, my champions. Rise and represent me, here and in every realm in existence! In return, I grant you access to my vault. Make use of these items well, warriors. Go out and spread the word of Boethiah!"