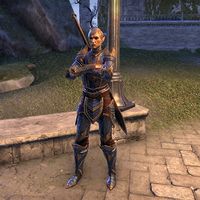 Battlereeve Tanerline is an Altmer who can be found just outside of Alinor Royal Palace. She appears there after you have completed Buried Memories, asking for your help to further investigate the Sea Sload threat. Afterwards you can find her in southwestern part of the city, near the Plaza of the Hand. Tanerline will there offer you a daily quest Sinking Summerset.

In Northern Elsweyr, Tanerline can be found at behind the Job Brokers' tent in Rimmen, near the other daily quest givers, and offers Dragon hunting dailies.

When you first speak to her, she'll say:

"Pardon my presumption, but you're the newcomer who saved the Crystal Tower, aren't you?"

When the quest has been accepted:

"Find Cainar and his companions in the caves of Karnwasten. That's where the last report said they were going. I even provided a squad of marines to assist them, so something significant must have happened for them to have gone completely silent."

Do you know anything else about the Sea Sloads?
"Frankly, I thought Sea Sloads were just a myth.
Other than the report from Razum-dar, I have no solid evidence of this so-called incursion. That said, the disappearance of Cainar and the marines I sent out has given me cause for concern."
Why not send an army to deal with the Sea Sloads?
"Without more information, there's no target to attack. Besides, I don't have an army at my disposal right now. The majority of our forces are committed to the continent and the Three Banners War.
I must rely on the forces at hand."

Tell me about the three adventurers you sent to investigate the Sea Sloads.
"The mage Cainar and the Redguard Miriya radiated an air of confidence and seemed extremely competent. The Orc called Grog, however, appeared to be in a constant state of inebriation."
"I sent the marines along to provide additional protection."

I met Cainar, Grog, and Miriya at the Eldbur Ruins.
"The Eldbur Ruins? We lost a patrol in that area a few weeks back. That must be where Cainar first picked up the trail of the Sea Sload.
I don't believe they knew exactly what they were hunting, but they were definitely on the right track."

After gathering information, you'll find her on the terrace below the Mages Guild, where she'll say:

"You're back. Cainar returned and said you went in search of Miriya and the marines. Tell me, is the Sea Sload threat as dire as the Queen's cat intimated?"
The Sea Sload threat is real. The marines didn't make it, but here's their report.
"Eight protect us! A cabal of Sea Sloads … High Elf traitors. Magic geysers that can sink the island I ask you to look into one threat and you bring me a multitude!
Still, this confirms the rumors. Now that we know, we can plan accordingly."
How will you respond to the Sea Sload threat?
"Normally, I'd dispatch every soldier at my disposal to deal with these geysers. However, the ongoing war has depleted our forces. It might be time to reach out to more people like you and Cainar's adventurers.
For now, take this with my thanks."

After completing the quest, she'll tell you:

"The work you did to bring us information on the Sea Sload, brilliant! That's only the beginning, however.
Now we need to act on that information before the Abyssal Cabal can inflict too much damage on the island."
How do we act on the information Cainar and Miriya uncovered?
"The Sea Sloads have unleashed abyssal geysers that can sink the island. They assumed we'd be so concerned with the creatures that bubbled out of them that we'd fail to realize the true danger until it was too late.
Let's disappoint them, shall we?"
What do you have in mind?
"Destroy the geysers. Find them and obliterate them as quickly as you can.
You'll need to fight through the creatures spawned by the geysers, so bring allies with you if you can. And make sure to destroy the pearls. That's the source of the magic."
I'll destroy the abyssal geysers.

This starts Sinking Summerset, to which she'll say:

"You have your mission. Find and destroy as many of these abyssal geysers as you can.
I have no soldiers to spare to assist you. I suggest you seek aid among the other newcomers to Summerset."

When the quest has been accepted:

"We can't leave even a single abyssal geyser active. To do so could spell disaster for all Summerset.
Find allies among the newcomers and deal with this threat. I promise a reward...provided you succeed."

When the quest hasn't been accepted:

"More abyssal geysers have sprung up across the island. we need to utilize the information Cainar and Miriya acquired and destroy them before they damage the island."

"The Sea Sloads have unleashed the abyssal geysers that can sink the island. They assume we'd be so concerned with the creatures that bubbled out of them that we'd failed to realize the true danger until it was too late.
Let's disappoint them, shall we?"
What do you have in mind?

"Destroy the geysers. Find them and obliterate them as quickly as you can.
You'll need to fight through the creatures spawned by the geysers, so bring allies with you if you can. And make sure to destroy the pearls. That's the source of the magic."
I'll destroy the abyssal geysers.

"You have your mission. Find and destroy as many of these abyssal geysers as you can.
I have no soldiers to spare to assist you. I suggest you seek aid among the other newcomers to Summerset."
Tell me what you know about the abyssal geysers.

"Just what was in the report you brought back. The Sea Sload cabal has seeded the island with enchanted abyssal pearls. The magic in the pearls somehow opens the geysers and calls forth the creatures.
They plan to use the geysers to sink Summerset."
Can't you send soldiers to destroy the abyssal geysers?

"What I wouldn't give to have enough soldiers for such a mission! Unfortunately, most of the Dominion military currently defends the Queen's honor in Cyrodiil. I'm left with a small defense force and whatever help I can scrounge up.
You, for example."

Why not send an army to deal with the Sea Sloads?
"Without more information, there's no target to attack. Besides, I don't have an army at my disposal right now. The majority of our forces are committed to the continent and the Three Banners War.
I must rely on the forces at hand."

"I haven't heard anything from the other groups I sent into the field. So give me your report. Have the abyssal geysers been dealt with?"
"It's just been one disaster after another today. What say you, newcomer? Has the abyssal geyser threat been averted?"
"The Proxy Queen keeps me as busy as a Sapiarch's apprentice! If I need to deal with one more disaster today, I may order the Divine Prosecution to round up vagrants for me to beat upon!
Now out with it. Were you able to disrupt the abyssal geysers?"
I destroyed at least three of the abyssal geysers.

"That's excellent news! Despite my misgivings, it seems the Queen's decree has been more of a blessing than a curse. I'm not sure what we would have done without the help of newcomers like you. You have my thanks and the gratitude of all of Summerset."

Battlereeve Tanerline can be found in Rimmen outside the Job Tent, when she is spoken with Tanerline will greet you with one of the following:

"For those seeking triumphs to brag about, adding the number of Dragons killed to their list is among the greatest achievements.
Come add to the glory of your own personal tale and speak to me."

"Dragons have the potential to threaten all of Tamriel, and I'm stationed here to help prevent that.
I'm organizing daily hunts to take down as many of these aerial killers as possible."

"So much trouble, these Dragons. So much death around them.
If you want to help stop them from killing others, please check with me each day. I'm organizing Dragon hunts."

"The more Dragons we kill before they spread, the better off everyone is.
Come see me each day to join in on a Dragon hunt. I assure you that a hefty reward is involved, too."
How can I help?
"I am grateful that you wish to help. We could use assistance stopping the spread of Dragons beyond Elsweyr. Optimally, we want to stop them altogether, so any effort you can throw into this goal would be appreciated."

"I'm glad you wish to help. We need valiant folk to slow down the spread of Dragons.
It is regrettable enough that they're causing suffering here. Let's try to prevent that from happening outside Elsweyr, as well."
What do you need me to do?
"Well, Dragons need to eat, and when they find a source of food, we notice. Then I share their current hunting grounds with those interested in taking them down.
If you choose to help, I'd give you that information, plus a reward when you're done."

"I think the best tactic is to defeat the Dragons at their hunting grounds. When they eat, we can stop them. Permanently.
What do you say? Are you willing to help?"
I'll do it.

After agreeing to hunt dragons. You can then ask her some more questions:

"We're grateful for your help in culling these creatures. When you've finished, stop back by for your reward."

"Thank you for helping. After you come back to me for your reward, I'm sure many would love to hear of your exploits."

"I appreciate the help. When you've finished your hunt, return to me. I'll have a reward for you."

"Thanks for your help. Once you're finished, return here. Your efforts deserve recognition and recompense."
You seem extremely interested in enticing people to hunt Dragons. Why is that?
"Dragons aren't exactly easy to kill, as you may know. People who hunt them alone don't often return. So, to prevent needless death, I coordinate Dragon hunters."
But why Dragons in particular? And not, say, Dremora. Or mudcrabs?
"Mudcrabs? Oh, you jest.
To answer your question, Queen Ayrenn is concerned that the Dragon threat will spread beyond these lands. So, as has been successful in other venues, I hire folk to kill them. Simple, yet effective."

Once you have managed to help bring down three dragons, you can return to the Battlereeve, who will greet you with one of the following:

"Ah, good to see you alive. I hope this means you've brought down some Dragons.
I could not be happier to hand out rewards, to be sure."

"Did you finish the job? Some here seem to have wagers on whether you have or not.
I'm not saying I'm among them, of course. I'm also not saying anything about having to dance if you're still on the hunt."

"Please give me some good news … we can add another tick to our count of Dragons killed, right?
The more we add to our tally, the better off everyone is."

"Have you finished your hunt? Knowing that there are fewer wings in the sky above us would ease the minds of many."
I defeated the Dragons.
"Excellent work! Knowing you were on the job eased my mind a little.
Come back tomorrow. I'll have more Dragons to hunt for you."

"Wonderful! Here's a reward for all of your hard work, my valiant friend!
Check back with me each day. These Dragons won't keep themselves in check."

She is associated with the following achievements: