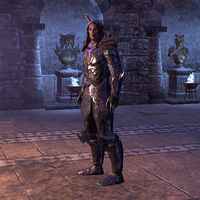 Baron Moves-Like-a-Smoking-Plume is one of the Barons Who Moves Like This of Fa-Nuit-Hen, who designed the Theater of Despair. He is summoned upon completion of Maelstrom Arena. 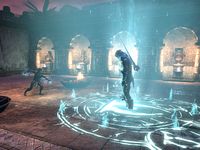 After talk to Fa-Nuit-Hen and completing the quest, he begins to cast a spell and the Baron Moves-Like-a-Smoking-Plume emerges from a sigil in the ground of the Redguard manor:

Fa-Nuit-Hen: "And now, it's time for my Barons to return to me!
Stand back, I haven't done this in quite some time. I'd hate to turn you inside-out.
Baron Who Moves Like a Smoking Plume, I summon you! Return to me!"
<The baron rises from the ground>
Fa-Nuit-Hen: "Approach me, my baron! Let me get a good look at you!
You look splendid, simply splendid."
Baron Moves-Like-a-Smoking-Plume: "It is good to be with you again, my prince."
Fa-Nuit-Hen: "And you! Your assistance has been most satisfactory. I won't forget it.
Or, anyway, my tutor won't forget it."

Upon summoning, the Baron is grateful for being returned to Fa-Nuit-Hen:

"Greetings champion. Thank you for returning me to my prince."

Who exactly are you?

"I am a master of martial knowledge, a sage of combat. I am a piece of my prince, and a reflection of his glory, just as the glory of my conquests will be reflected in him."

What does your name mean?

"It is not a name, it's a title, awarded to me for my achievements in mastering the ways of battle of the Deadlands.
The secrets of Dagon's warriors are no secret to me."