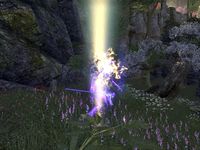 Backlash deals a small amount of damage and copies all damage inflicted on an enemy and releases a percentage of it as a blast of Magic Damage. Purifying Light causes a healing effect to remain attached to the target, restoring the Health of all of your nearby allies. Or you could choose Power of the Light, which converts the casting cost to use Stamina, and changes the damage to Physical Damage. It also reduces the target's physical and magical resistance, effectively increasing all damage taken.

1.3.3
* Fixed an issue where Backlash Rank III wasn't dealing any damage.
1.4.3
* Fixed an issue where you could stack multiple copies of Purifying Light or Power of the Light (both Backlash morphs) at the same time.
1.6.5
* Backlash now ignores the damage caused by other player characters using Backlash. Multiple casters can now all stack Backlash on the same target.
2.3.5
* Increased the maximum damage limit for this ability and its morphs by 25%, but decreased their damage stored amount by 66%. In addition, this ability and its morphs can no longer be reflected.
2.4.5
* Power of the Light: This morph now deals Physical Damage instead of Magic Damage.
2.7.5
* This ability and its morphs now deal moderate damage when they are initially applied to the enemy. This damage does not contribute to the copied damage delivered at the end of the ability's duration.

Making the damage unblockable ensures it behaves consistently when compared to Daedric Curse. Both those abilities are similar in functionality and how they thematically apply their damage. This also ensures that Backlash is not double penalized by block, since some of the damage it copies will likely be blocked or avoided by enemies seeking to minimize Backlash's final attack. Hitting the maximum damage limit against another player now requires a significant amount of uninhibited damage from the Templar, and enemies will have more counterplay in reducing Backlash's burst damage if they actively mitigate or avoid damage.
Changing Backlash's final damage so it no longer critically strikes prevents the Templar from reaching the damage cap too easily with a high Critical Strike rating.

3.0.5
* Fixed an issue where the final damage dealt by this ability and its morphs was not respecting its damage limit when used against damage shields.
3.3.5
* Fixed an issue where multiple Templars using this ability and its morphs against the same target would not deal the full amount of intended damage.
4.2.5
* Increased the cost of this ability and its morphs by approximately 5%.
5.0.5
* Power of the Light: Adjusted the ability rank up for this morph so it no longer gains damage on the initial hit, but instead increases the duration of Minor Fracture and Breach applied, since that is the focus of the morph. This will result in approximately a 3% damage loss on the initial hit, but the duration of the Minor Fracture and Breach will last 9 seconds, up from 6 seconds at their final rank.
5.1.5
* Purifying Light: Decreased the healing per tick by approximately 29%.
5.2.5
* This ability and its morphs' final explosion can now Critically Strike. Boom baby.
6.1.5
*Fixed an issue where this ability and its morphs stored much more damage done to the target than the tooltip stated. This will make the ability require more damage, particularly in PvP, in order to reach its maximum damage.
8.2.5
*The final damage now deals a guaranteed amount of damage based on your highest offensive stats, rather than dealing damage based on the damage it took from you over the duration and with a cap based on your Weapon or Spell Damage.
Retrieved from "https://en.uesp.net/w/index.php?title=Online:Backlash&oldid=2695092"