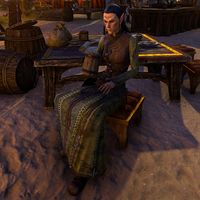 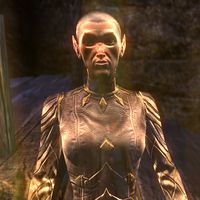 Aniel revealed as a Daughter of Baan Dar

Aniel is a avid fan of Baan Dar's Boast, an annual event where scoundrels, thieves, and mischief-makers gather together to "worship" Baan Dar by drinking, celebrating, and playing pranks on one another.

The participants believe that, by playing particularly funny pranks, they can win an invitation to a great party in Baan Dar's realm, called The Five Finger Dance. This has turned into a competition between a Bosmer group called the Pariah's Hand, and a Khajiit group called the Subtle Knife. Recently, Aniel has felt that the event has gotten a bit less exciting, and seeks your help in spicing things up by pranking the pranksters.

If you help her, she will tell you that this Boast is one of the funniest ever, and will invite you to The Five Finger Dance (along with the Pariah's Hand and Subtle Knife), where she will ask you to worship Baan Dar further by cooking chicken and serving the guests. Finally, she will reveal her true nature as a Daughter of Baan Dar, who helped you "[b]ecause as a follower of Baan Dar, I'm entitled to a little fun now and again, aren't I?"