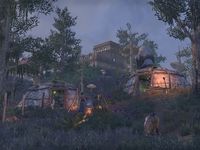 Ahemmusa Camp is an Ashlander camp found along the Bitter Coast in Vvardenfell. Several Caravan Guar live in the camp. Alaburani only appears at the camp during the related quest, and she remains there after she appears.

A cabin in the swamp can be found south of the camp. A heavy sack can be found behind the cabin, and a chest can be found in the lean-to next to it. Four bantam guar and several mudcrabs live near the house. The containers near the cabin are owned, and the interior is inaccessible.

This Elder Scrolls Online-related article is a stub. You can help by expanding it.
Retrieved from "https://en.uesp.net/w/index.php?title=Online:Ahemmusa_Camp&oldid=2148108"
Last edited on 9 May 2020, at 15:20