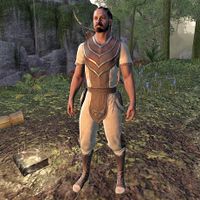 Agalir is a Redguard vampire hunter part of a group currently investigating the ruins of Goldfolly. He will not appear until his leader, Sabonn, calls for him and his companion, Zungarg.

After speaking to Sabonn, he will call to his friends who appear out of nowhere:

If you speak to him, he'll say:

"Are you ready to take the sword to these abberrations, Oblivion's own children?"
I'm ready.
"That's all I need to know. Anyone who tries to harm us will answer to my blade."

If you speak to him before speaking to Sabonn, he'll tell you:

"If you are done delaying our mission, let the big Nord over there know."

Once you've agreed to help, Sabonn will address the group:

Sabonn : "Listen closely. This is the plan."
Sabonn : "We're going to lay our trap in the abandoned village up the hill. Zungarg, you guard the west gate."
Zungarg : "No one's getting by me."
Sabonn : "Agalir, you're on the ridge by the east gate."
Agalir : "May the Divines guide my bow."
Sabonn : "I'll take the north. Our new friend will use the bloodstone to lay the bait in the well at the center of town."
Zungarg : "I love this part."
Sabonn : "Drop the bloodstone into the well. Blood will spout forth, and it'll draw the vampires out of hiding. We'll be waiting to cut them down."
Sabonn : "The vampire lord won't sit by while we thin his flock. If you see him, whistle."
Sabonn : "If everyone's ready, let's get into position."
Zungarg : "Whoever kills the fewest bloodsuckers buys the drinks!"
Agalir : "Don't joke, lest the Divines punish your frivolity."

You can speak to Agalir who'll be on a ridge east of the stronghold. He'll only say:

"I'll do my part, just get into position and do yours."

After battling the vampires, Sabonn will become worried about his friends who didn't join the fight. Sabonn will send you to the east gate to look for Agalir whil he searches for Zungarg to the west. When you arrive at Agalir's location, you'll only find a burnt corpse. Activating the corpse will illicit the following message:

"<Agalir's body is a blackened husk.>" 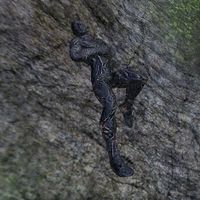