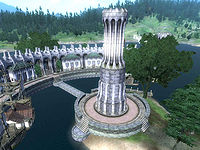 Looking west-southwest over the lighthouse

The main entrance leads into the Waterfront Lighthouse, below is the Imperial Watch Barracks, and below that is the private quarters of Velan Andus. 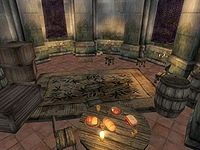 The top floor of the lighthouse

The upper area holds six barrels, three crates, and two non-respawning sacks, and they all hold clutter. The table on the west wall is set with two apples, two cheese wedges and a loaf of bread.

Moving clockwise around the room from the entrance from above, lying against the walls are a chest of drawers that holds clutter, two single beds, a food cupboard, and a table set with three apples, two cheese wedges, a loaf of bread, and two bottles of Surilie Brothers Wine. Another food cupboard sits between the ladder back up and the trapdoor to Velan Andus' private quarters.

Between the ladder from above and the double bed lies a chest of drawers that contains clutter with a dish that holds two apples on top and two non-respawning clutter sacks next to it. The table on the southeast wall is set with three apples, two cheese wedges, and two loaves of bread.