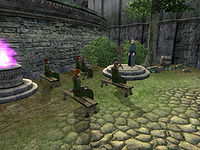 The University Lectures are a series of lectures given every afternoon at the northeast end of the Arcane University gardens. Every morning between 10 and 11, and every afternoon between 4 and 6 pm, a Mage Scholar will give a lecture which is attended by the Mage Apprentices of the university.

There are five lectures, all of which discuss Doomstones and Runestones. The lecture for that day is randomly decided at midnight; the same lecture will never be given on two successive days.

First, all rune-marked ancient stones are called runestones, though there are, in fact, two very different classes of runestones.
Doomstones have red runes, and are associated with stone circles. Runestones have blue runes, and appear as solitary monuments.
The runes for which the stones are named glow in the dark; however, there is no evidence that the stones are magical.
Various naturally occurring minerals and crystals, like glass and ebony, glow in the dark by their own light -- without being magical.
However, the universal belief that runestones are magical, despite all evidence, is good reason to suspect that the runestones are indeed magical.
One theory is that the stones were once magical, but they have lost their magic, either through age and disuse, or because of sin or neglect.
It may also be that they are magical, but only for certain individuals or under certain circumstances, or that their magics are secret.

Cyrodiil's runestones are thought to belong to one of three time periods: the Dawn Era, the Merethic Era, or the late First Era.
Those who believe the runestones to be Dawn Era artifacts, created by the Aedra or Daedra, often describe them as Lorkhan's birthing gift to mortals.
Others assign the runestones to the Merethic or Early First Era, primarily on the basis of their simple, even crude design and craft.
The most common practice is to place the raising of the runestones within the High First Era Cyrodiil of Empress Hestra and the Reman Emperors.
Runestones found in forts like Sancre Tor support a First Era date, though the stones could have been moved to the forts from earlier sites.
The greatest objection to First Era dating is that the stones are completely unlike any other examples of First Era architecture.
I believe the runestones date from the Dawn Era or Merethic Age, but they were moved to new sites by late First Era emperors.
Since the runestones have lost their enchantments, however, we may never know why they were moved, or what function they served at First Era sites.

Ignore the controversy of whether the runestones are enchanted. Let me suggest one possible account for the placements of the runestones.
Before Tiber Septim, Cyrodiil's roads varied greatly in quality, and were often impassible in bad weather and winter seasons.
In the late First Era, Empress Hestra improved the roads, and the Reman Emperors continued her policies.
The last period of First Era road-building was in the reign of the last strong Akaviri Potentate, Sidri-Ashak.
Note that three classes of runestones are named, respectively, Hestra Stones, Reman Stones, and Sidri-Ashak Stones.
Could these runestones have served as waypoints and landmarks for military patrols of the nascent Imperial Legion?
Did battlemages activate runestones on arrival, thus lighting arcane beacons within the next runestone?
The Mages Guild should fund further study of the early Imperial Legions, their battlemages, and their traditions of patrol and route-finding.

Suppose that the runestones are divine, and that the secrets of their magics are revealed only by divine revelation.
Suppose that the runestones existed, for whatever reason, and in whatever form, long before the coming of the Cyrodilic emperors.
Suppose, however, that the power of these stones had been hidden, but was revealed to certain holy men or prophets in the First Era.
Suppose that, under the guidance of the gods, these runestones were newly consecrated to a great purpose... the founding of the Cyrodilic Empire.
Once these ancient monuments might have been powerful bulwarks of the Cyrodilic emperors, battlemages, and priests.
But imagine, as the emperors grew weak, and as the power and glory of the Empire waned, and as the people fell away from their service to the gods...
Imagine that the power of these runestones might have diminished -- weakened, then extinguished -- by the sins of the Potentates.
Few records survive from the Dark Ages of the Potentates. Thus might the secrets of the runestones be lost... in wickedness, vainglory, and neglect.