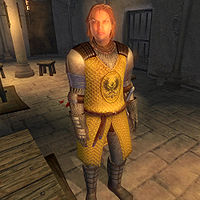 Tyrellius Logellus is an Imperial Guard and the jailor in the Bruma dungeon. He's looking for the gold Jorundr stole during Two Sides of the Coin.

As a guard, he wears the Bruma cuirass along with chainmail greaves, chainmail boots and chainmail gauntlets, and is armed with a silver longsword. He also carries a small amount of gold, keys to Castle Bruma, and a random lower class shirt, pants and shoes.

You will first hear of him during Two Sides of the Coin, when you ask Jorundr about the stolen gold: "That fetcher of a guard Tyrellius is always trying to be sneaky. Well, you can forget it. Tell him it isn't going to work." As you get thrown in jail afterwards, Tyrellius will walk up to Jorundr trying to find out where he stashed the gold, unsuccessfully. If you manage to talk to him through the cell door, he won't be very friendly: "I don't talk to inmates. Now shut up, and don't bother me." After that he will just wander the dungeon.

If you tricked Jorundr into believing you killed Arnora, he will be wandering around Jorundr's chest of gold, at which point he will have different items with him: instead of the Bruma cuirass, he will wear a regular chainmail cuirass, and his keys and clothes will be missing. He will walk up to you and say: "I'm here for Jorundr's gold, and you're my only loose end. I'd been hoping to get someone in his cell and loosen his lips, and then you showed up. You really should be more careful when you talk in the dungeons... the sound tends to carry. Jorundr's such an idiot. I've taken care of Arnora, she won't be around to point the finger. And Jorundr's not going anywhere for a long time. That just leaves you...", after which he will attempt to kill you.